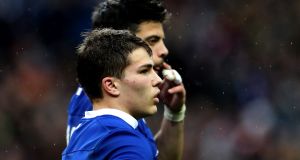 France’s classy half-back pairing of Antoine Dupont and Romain Ntamack could conceivably be around for the next two World Cups. Photograph: James Crombie/Inpho

The Guinness advertisement for the Six Nations, aka The Purse, which features the two Welshmen whose mum left them strict instructions in her will to “spend every last penny on the Six Nations” is both deliberately corny while having a certain charm. It’s already looking poignant as well.

The ad was an excuse to take in some of the sights in the six cities as well as fans from each of the six countries, while capturing the tournament’s beery bonhomie.

Somehow the ad was given particular credence for having two Welsh accents. It is the Welsh penchant for supporting rugby abroad as well as at home, and their singing, which embodies the Six Nations.

Whatever about the Pro14 taking place in empty grounds, or even the European matches for that matter, last weekend the Six Nations looked particularly bereft to the backdrop of empty stadia.

Of course the players and the rugby are paramount, but in the Six Nations the fans aren’t far behind. More than any other annual tournament in the world, it is the sport’s oldest competition which thrives on the invasion by thousands of away supporters to some of the world’s greatest cities and/or rugby cities.

Nothing illustrated this more than the pre-match pageantry. But last Saturday instead of the swirling crescendo of anthems being sung with patriotic passion, the on-pitch cameras were altogether too close to players, as they utterly butchered them. Enough to send a shiver down the spine rather than up it!

As if to illustrate the sense of historical loss, this was compounded by so-called Super Saturday kicking off in an empty Parc Y Scarlets after sepia-tinged replays of JJ Williams in full try-scoring flight with touchlines barely distinguishing the players from overflowing crowds in the old Arms Park and elsewhere.

After an interlude for the upcoming and hastily-arranged Autumn Nations Cup, last Saturday’s finale didn’t exactly whet the appetite for a renewal of Six Nations rugby in, wait for it, just 14 weeks’ time.

The Six Nations, and to be precise its financially-stricken unions and federations, are still exploring the possibility of putting the start of the 2021 version back from early February by a few months. Were, by some miracle, a vaccine to be found and that two or three month delay to facilitate full stadia, it would be worth well over €100 million to the six.

It was always stretching things to describe last Saturday as potentially Super, for it was probable that the meaningless Wales-Scotland game wouldn’t amount to much and that England, 1/4 favourites from before the resumption, would set too stiff a target for either France or Ireland.

That England should seal the title with such a limited game plan, kicking the ball out of hand 44 times, was also more than a little grim

True, that England laboured to put Italy away did leave the door more ajar for Ireland but it was closed from early in the second half in the Stade de France.

And so an unexceptional tournament, made memorable by its hiatus more than anything else, had an anticlimactic ending, especially hereabouts. A ho-hum Irish performance in a ho-hum tournament.

Admittedly, Welsh fans will be feeling even worse about their team’s worst performance since the pre-Warren Gatland days. After the optimism generated by the 42-0 win in Wayne Pivac’s opening game, Wales looked devoid of creativity in losing to a Scottish side that, while feeling typically chipper about itself after registering three wins, are being rewarded for seemingly ditching their high -tempo brand of rugby for something much more prosaic.

Italy had failed to register a solitary point in two of the three games before lockdown and two of its three tries post-lockdown were born out of intercepts. It seems as if they are becoming even less potent. That England should seal the title with such a limited game plan, kicking the ball out of hand 44 times, was also more than a little grim.

All of which made the France-Ireland game by some distance the most entertaining and watchable, albeit the bar had been set very low.

That it’s taken France fully a decade to even mount a challenge is a joke really, but their rejuvenation under Fabien Galthié and Co saved the tournament

Ultimately though, the title was decided on the opening weekend by dint of England eking out a bonus point in Paris thanks to a Jonny May-inspired recovery allied to France letting their grip slip after leading 24-0.

England’s third title in five years, while giving four more players debuts last Saturday, merely reaffirmed what we’ve known for years, that they are the team one has to finish above. They’ve finished in the top two every year bar one since 2010. Unnervingly, the sense remains that they won this title without playing anywhere close to their World Cup semi-final win over the All Blacks.

That it’s taken France fully a decade to even mount a challenge is a joke really, but their rejuvenation under Fabien Galthié and Co saved the tournament. It may do them no harm that they didn’t win it, and that the Mohamed Haouas red card in Murrayfield will serve as a reminder of what happened to them at the last World Cup.

In any event, with a properly-equipped coaching ticket, a supply of talent swelled by successive Under-20 World Cup wins, a settled team and the prospect of hosting the 2023 World Cup, they’re back with a vengeance and a half-back pairing in Antoine Dupont and Romain Ntamack which could conceivably be around for the next two World Cups.

That could not be said of Conor Murray and Johnny Sexton, who were starting their 61st Test together last Saturday. They remain the best in their positions, with nothing like the Test-ready quality of Dupont and Ntamack coming through the provincial system.

The likes of Craig Casey, Ben Healy and Harry Byrne are better served acquiring more game time with their provinces and there’s no point in throwing the baby out with the bathwater. Resistance to this is one of Irish rugby’s enduring strengths.

What’s more, not even the way Ireland’s performance disappointingly fell away in the second half last Saturday couldn’t disprove the feeling that the second-row and back-row options are pretty well-stocked, with Ryan Baird to supplement Caelan Doris and Will Connors. The same of the midfield, and James Lowe will bring an X-factor and stimulate those around him, especially in the back three.

It’s not all doom and gloom. Ireland are at the least still better than the rest, even if there’s an unsettling suspicion that a gap may be emerging in the class divide between England/France and the other teams.