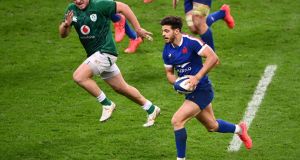 Searingly quick and lethal finisher, May dragged England back into the opening game in Paris almost single-handedly with opportunist tries which ultimately went a long way towards them pipping France for the title.

Even when largely kept quiet, like last Saturday, still produced deft tip-on pass for one try and finished off another. Strength, elusiveness and offloading make him one of the most dangerous 13s in the world game.

A second playmaker at 12 for first four games before kicking ad nauseum in Rome at ‘10’. Still, he ultimately captained his team to the title and hardly missed a kick save for Murrayfield storm. England’s driving force.

A more natural fit at inside centre but he started three games on the left wing, so his versatility as well as his form, strength in contact and strong carrying were a key element in France’s rejuvenation.

Lit the tournament up with the variety and vision of his game. A nerveless goal kicker, he won the golden boot with 57 points, scored three tries and had four assists. Only turned 21 last May! Wept.

Ticks every box – kicking, strength, vision, footwork, acceleration, deadly trailers and game breaker. Made the most offloads (12), had four try assists and carried for 249 metres. Should be France’s first ever player of the tournament.

Along with Zander Fagerson, Sutherland has helped turn a Scottish Achilles heel, scrummaging, into a strength, and has been a dynamic carrier. Could be that rarity, a Scottish Lions Test contender.

Another utterly reliable campaign. His set-piece proficiency is one of the rocks around which England’s latest title was built. A strong carrier and skilful hooker, albeit maybe England don’t always get the best out of him.

Now a strong scrummager as well as a surprisingly nimble and dynamic carrier, and less ill-disciplined too. By contrast Mohamed Haouas’s rash red card against Scotland probably cost France a Slam.

A title-winning cog for the third time in five years. Of 80 tackles, the third highest, 22 were ‘dominant’, which was eight more than anyone else. Played every minute, hit 33 more attacking breakdowns than anyone else and took 17 lineouts. A force of nature.

The one Irish player who didn’t take a backward step in Twickenham. Consistently showed up at the breakdown or in traffic, only three players made more than his 57 carries and he was excellent in the air too.

Granted, only played the first five minutes at No 6 but he did play all bar one minute, was man-of-the-match in wins over Scotland and Wales, made the most carries in the tournament (78) won the most turnovers (7) and made 61 tackles.

At 26 a surprise but inspired choice as captain. Played every minute, was the tournament’s top try scorer (four), had four assists, was the fourth highest tackler (77), third highest offloader and won most lineouts (25).

Only 23, not a behemoth but dynamic and huge workload. Man-of-the-match against England, Italy and Ireland, second for carries (66), third for metres made (393), joint-second for breakdown steals (four) and second for tackles made (81). Nuff said.