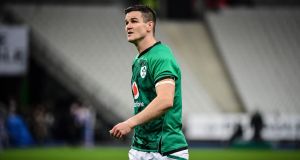 Johnny Sexton has said Ireland weren’t ruthless enough as they were beaten by France in Paris. Photograph: Dave Winter/Inpho

Unlike French songstress Édith Piaf, Ireland left Paris with plenty of regrets, particularly on foot of a slipshod second half performance that denied them the chance to press strongly for a stated goal of outright success in the Six Nations Championship.

Mistakes, manifest principally in handling errors and poor execution, were at the centre of Ireland’s defeat to France at the Stade de France, something that Ireland captain Johnny Sexton acknowledged in the aftermath of a frustrating Parisian night.

He explained: “I felt that they [France] took their opportunities really well sometimes [from] nothing or off our mistakes even. We weren’t ruthless enough when we had the chance to score.”

Sexton elaborated on his thinking behind opting for scrums or kicking to the corner from a slew of penalties. “They had a yellow card so for 10 minutes three of my decisions were when they had the yellow card. From a couple of them we took scrums [and] we should have scored. Just before half time we could have taken the three [points].

“Look we knew we had to win the game by more than six or get four tries. We were trying our best to put the pressure on. We knew that the French team with the players they had could score tries out of nothing. It’s like when you are playing the All Blacks you have to have the mentality to go and score tries.

The Ireland captain continued: “they can create something out of nothing. We knew that was going to be the case. We studied them hard. There were a couple of tries [that came from] our mistakes and then a couple of moments of brilliance by them. I thought that we coped well enough with them at times and at other times we didn’t put enough pressure on them.

“We knew that they could score tries from nothing and that is what they have done throughout the championship and that is the reason why we were quite aggressive in our decision making.”

He was asked about how he would compare this Ireland team to the two countries that finished above Andy Farrell’s charges in the Six Nations table. Sexton responded: “I thought we had a lot of opportunities tonight in comparison to the England game. In the England game I don’t think we had any opportunities [we had] in the first half [in Paris] in terms of scoring.

“At this level you can’t give teams scores from your mistakes. You need to make them work hard. They made us work unbelievably hard for our scores and we weren’t clinical enough; I don’t know how many five-metre lineouts we had. Our conversion rate from them wasn’t too hot.

“I felt tonight was there for the taking. I think we will look back on it with a lot of regrets. Yeah they are a good side, a young side and they’re going places. They have a much improved organisation and spirit within the squad. They are a very good team.”

He also spoke about the conversation he had with referee Wayne Barnes when the English official was considering whether to award a penalty try after French fullback Anthony Bouthier deliberately batted the ball into touch and goal to deny Ireland wing Hugo Keenan a try.

Sexton said: “What I said is that if a guy commits foul play you have to take him out of the equation; that was my understanding of the rule. For example if it was a high tackle you have to look at the picture as if he [the offender/transgressor] wasn’t there.

“I just thought that Hugo having missed the first bounce was standing right underneath the ball and would have grabbed it and put it straight down. They didn’t see it that way and felt that there was another French player (Gael Fickou) in the vicinity. Small margins, we didn’t get the rub of the green but we scored afterwards.” Sexton had a point. Fickou wasn’t close enough to prevent a try if Keenan, as seemed likely in probability, reclaimed possession.

Victory wasn’t beyond Ireland, they just put it out of reach with too many mistakes. Sexton’s frustration and disappointment was manifest in his head shaking departure from the pitch to be replaced by Ross Byrne; an understandable reaction from a ferocious competitor and one that offered a window into his emotions at that moment.

When asked about it, he replied: “I was very disappointed coming off like anyone would be. You are losing the game. What would you like me to do when I am coming off the pitch? [It was an outpouring of] disappointment we didn’t win the game. We were 28-20 with 15 minutes to go and we had a five-metre lineout and we didn’t capitalise. They are just the moments that you will look back on and regret.”

The upcoming Nations Cup offers opportunities for the national side to evolve and develop further under Andy Farrell and his coaching team. But for the next few days, the nature of the defeat will arguably hurt more than the result.