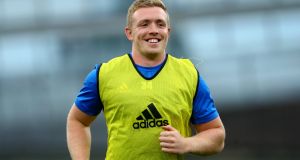 Dan Leavy is in line to play his first game of rugby in 18 months in Leinster’s Pro 14 clash against Zebre at the RDS on Friday night. Photograph: James Crombie/Inpho

Dan Leavy is poised to return to action for the first time since suffering a horrific knee injury in a Champions Cup quarter-final match against Ulster at the Aviva stadium in March of last year after he was named among the replacements for Leinster’s Pro14 game against Zebre in the RDS on Friday night (7.35).

It’s a significant landmark for the 26-year-old Leinster and Ireland flanker, who has worked so hard to overcome the injury and also for his province and country in the return of an outstanding player.

Leinster head coach Leo Cullen said: “It’s great. As we saw at the time, it was a nasty injury, 18 months ago now.

“All the medical team, especially Karl Denver, worked so hard to get him back to this point but he did the work so huge credit to him, so hopefully he will get some action. It will be great to see him get some action and take another step.

“People need to be patient and have realistic expectations. He is still a quality player with a big personality. He needs to find his rhythm. Hopefully he hits the pitch of it and hopefully he’ll go well.”

On the bench, Ciarán Parker is in line to make his Leinster debut should he be introduced. Leinster face two old boys Ian Nagle and Mick Kearney, who will make up the secondrow in the Zebre team coached by Michael Bradley.