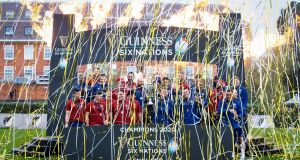 Eddie Jones believes his revamped England team is destined for greatness having clinched a third Six Nations title in five years, almost 12 months to the day since their “traumatic” World Cup final defeat.

England were officially crowned Six Nations champions on Sunday with a biosecure trophy presentation at their Teddington base following what Jones described as a night of celebrations to remember in Rome after their rusty victory over Italy, and France’s subsequent win over Ireland, sealed the title.

After a few days off England will reconvene on Thursday to begin preparations for their Autumn Nations Cup campaign, beginning at home to Georgia on November 14th, and with a second national lockdown imminent, Jones again reminded his players of their responsibilities, warning them that they are the microscope after the Barbarians fiasco reduced rugby union to “a laughing stock”. An outbreak of several Covid-19 cases among the Fiji squad also serves as the need to remain vigilant with Autumn Nations Cup organisers investigating and desperately hoping the competition still goes ahead as planned.

On Sunday however, England were at least able to bask in their success and a title that looked unlikely when they followed up their World Cup defeat by South Africa with a lacklustre opening defeat in France. The 23-man squad in Italy featured four debutants and 10 changes from that which lost to the Springboks.

“We’ve evolved through this tournament, some of it through injury, where we’re building a new team that is going to take us to [the]greatest heights in the next four years,” said Jones. “Losing a World Cup final can be quite traumatic. It puts a dent in you and it leaves a scar that you carry around for the rest of your life. You’ve got to find a way to get forward again.” England watched France’s win over Ireland at their hotel given the strict Covid protocols in place in Rome and Jones believes his players will benefit from the shared experience. He added: “They had a few beers and a few wines. It was one of those nights you do remember. From that you develop stronger bonds and relationships that can help you in the future.

“That then transposes itself to certain situations on the field where you look like the best orchestra in the world where everything’s moving together and it looks like everyone knows exactly what the other person is doing.” Jones is expected to make a number of changes against Georgia but revealed George Ford is “borderline” with an ongoing achilles injury. Victory would set up their title tilt with subsequent pool matches against Ireland and Wales before a final ranking match and Jones reiterated his wish to “put smiles on people’s faces” as the second wave of the pandemic takes hold.

“All of our players are aware of their responsibilities, as are the staff,” he added. “We’ve got to be cognisant of the fact that everyone is looking at what we’re doing. We’ve got to be so gracious for the opportunity. We understand that responsibility and we want to make sure again that we try to put smiles on people’s faces.” - Guardian