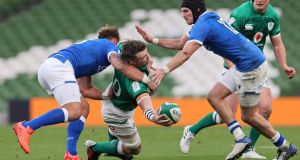 In the world of offloads, it was in the upper echelon. Peter O’Mahony isn’t the type of character to commandeer the spotlight for his own purposes but did smile when asked about it, replying, “I’ve had a couple of good ones now but it would top three anyway.”

He celebrated the moment in real time last Saturday as he rose from the ground and watched Bundee Aki skate across the line for a try in Ireland’s Six Nations Championship victory over Italy.

O’Mahony’s dexterity in taking a tackle from Federico Mori and as Carlo Canna closed in, offloading, one-handed behind the Italian centre’s back to the supporting Aki; a happy union of instinct and execution.

The Ireland players have been encouraged to make on-pitch decisions based on what they see in an instant during a game under the new coaching regime headed by Andy Farrell. It’s not about gung-ho, low percentage offloads but nor is it possible to completely remove the element of risk. The middle ground between the two comes from working on those skill sets in training.

“It comes down to work. You can’t just do that at the weekend without there being a lot of practice involved. I suppose with the group that’s taken over, I remember the first day at the High Performance Centre, [we went] straight into skills and we’ve just come out of it there too [today] so we’re constantly practising it. It’s bound to become part of your game.”

The Munster captain enjoyed a 13-minute cameo from the bench at the weekend but he was the first to acknowledge that getting a starting jersey for Saturday night’s Six Nations clash against France in Paris will be very difficult based on the collective and individual performance of the backrow against Italy.

O’Mahony said: “The performance from the starting backrow at the weekend was, I thought, second to none. Their energy, their moments in the game, the amount of work they got through was incredible and from a team point of view you couldn’t be prouder of the way the team worked at the weekend, so as I said it’s an absolute battle every weekend to get any jersey in this team.”

Despite that appraisal it doesn’t compromise his desire to try and win back a starting jersey in what will be his 69th cap if he plays in Paris. Ireland coach Farrell has already explained how current form and training well are tenets for selection so every day presents an opportunity in that regard.

O’Mahony admitted: “Being a competitive athlete in the environment we are in, everyone wants to play and that’s not always possible. I’d be sitting here lying to you if I said I didn’t want to start but at the end of the day there are 23 people who (can) take to the pitch. There’s a massive emphasis put on our bench to come on and not just roll in but to make a difference.

“There are guys who have been out there for whatever, 55, 60, 65 minutes and you have to make a difference and be different when you come on; that’s the pressure we put on ourselves. I wouldn’t say it’s frustrating [not starting]. Certainly, competitively I want to play every game, I want to start every match, that’s just the way we all are as a group. But we understand that team comes first. It doesn’t matter what you get, you’ve got to be ready to go.”

Guardiola blames himself for Manchester City’s goal problems 22:31
Klopp sings ‘multi-instrumentalist’ Firmino’s praises as Brazilian back on form 22:30
Fernandes on the double as Manchester United get their revenge 22:17
Giroud’s late winner sees Chelsea into knockout stages 20:29
Irish racing hopes ‘game-changer’ vaccines will accelerate return of spectators 17:00
Crossword Get access to over 6,000 interactive crosswords