Further cuts to be applied to Irish RWC squad next week

In what seems like death by a thousand cuts, Dillane and Scannell are the first to go 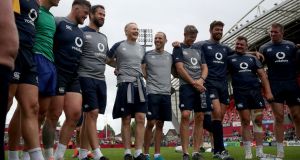 Further pruning of the Irish squad will take place next week following the first of four warm-up games against Italy at the Aviva Stadium on Saturday. In what seems like death by a thousand cuts, Ultan Dillane and Rory Scannell were the first to be released back to their provinces as the remaining 43-man squad assembled in Carton House.

Joe Schmidt had named a 44-man training squad at the end of May which was subsequently supplemented by the addition of Will Addison. It’s likely that Schmidt and the coaching staff will further re-assess their options in the wake of Saturday’s game against the Azzurri before the squad fly to Portugal on Wednesday August 14th for an eight-day warm-weather training camp at Quinta do Lago in the Algarve.

The squad will then transfer to London on Thursday, August 22nd in advance of their game against England in Twickenham two days later. A 31-man squad, pending any enforced changes, will be submitted to World Rugby on September 2nd at the behest of the game’s governing body, following the first of the games against Wales on Saturday August 31st, before being finalised and publicly announced on September 8th, a day after the final preparatory game at home to Wales.

For example, despite the loss of Sean O’Brien and Dan Leavy, as ever no combination will be trickier than picking five back-rowers from the seven in the squad.

The aforementioned Scannell was always the outside of the five centres named in the original training squad, and it could be that the remaining quartet will all travel to Japan, namely Bundee Aki, Robbie Henshaw, Garry Ringrose and Chris Farrell, unless one is sacrificed to accommodate a sixth halfback or sixth outside back.

The squad have had five tough weeks of pre-season since coming together on June 16th, completing two training weeks at Carton House, a week at Connacht Rugby’s base in Galway, a week in UL at Munster’s training base and week at the IRFU’s new High Performance Centre in west Dublin along with two regeneration weeks in between.

Over 30,000 tickets have been sold for the first of Ireland’s two Guinness Summer Series against Italy on Saturday.