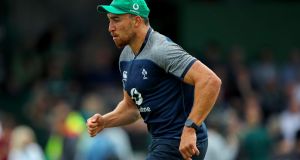 Joe Schmidt has named an extended 43-man squad for the first of Ireland’s Summer Series matches on Saturday.

Ireland play Conor O’Shea’s Italy at the Aviva Stadium at 2pm, they then have a week off before playing England in Twickenham on August 24th. A week later they visit Cardiff to play Wales before ending their World Cup preparations with a home match, again against Wales on September 7th.

Schmidt’s team kick-off their Rugby World Cup campaign on September 22nd versus Scotland, and will bring a 31 man squad to the tournament in Japan.

On Monday morning the IRFU confirmed that their 45-man training squad had been cut to 43 - with Connacht lock Ultan Dillane and Munster back Rory Scannell returning to their provinces.

There are 23 forwards named and 20 backs - with Munster’s South African secondrow Jean Kleyn still in contention after Dillane’s departure. Kleyn and his Munster teammate Mike Haley remain the only uncapped players in camp.

Ahead of the Italy match the squad have returned to their usual Maynooth training base after completing five weeks of pre-season training.

That’s consisted of two training weeks at Carton House, a week at Connacht Rugby’s base in Galway, a week in UL at Munster’s training base and a week at the IRFU’s new High Performance Centre in west Dublin, along with two “regeneration weeks” in between.