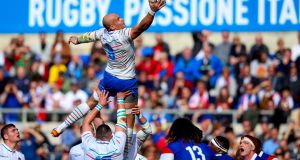 The Italians embarked on a tough schedule in the build-up to Japan that saw them travel to Dublin, where they were competitive against Ireland, while hosting Russia before facing a trip to Newcastle to face Eddie Jones’ England. Sergio Parisse has been a wonderful servant to Italian rugby and in his pomp one of the best players in the world, but that hasn’t been the case for several seasons. For Italy to be a factor in the group they need to be more disciplined and unearth a more fluent attacking game.

The bare statistics don’t make good reading for Conor O’Shea, without a win in 15 matches over the past three Six Nations. Yet beneath the surface the issues are less stark when the performances at underage level and the players coming through are factored into the equation. The Dubliner signed a four-year contract in 2016 that takes him up to after the 2020 Six Nations and during that first season led the Azzurri to a first ever win over the Springboks in Florence. Italy were probably the most consistently competitive during the Six Nations just gone.

This will almost certainly be Parisse’s final appearance on the biggest stage - even the Azzurri’s 35-year-old Argentina-born warrior can’t go on forever. And while Parisse remains talismanic for Italy, his powers are on the wane and an overreliance on the veteran number eight is now detrimental to the side. However his experience and leadership will be key, particularly in tournament rugby, and he will be aided by the returning Leonardo Ghiraldini, who has won his fitness battle after rupturing knee ligaments during the Six Nations.

Matteo Minozzi was out for a year with an anterior cruciate ligament injury sustained in a club game for Zebre but had been back training with Wasps, whom he signed for at the start of the year, and has taken a full part in the Italians World Cup preparations. The Padua born fullback made his debut in 2017 but it was in the 2018 Six Nations that everyone was treated to his prodigious ability; he scored four tries, made the team of the championship and just lost out to Ireland’s Jacob Stockdale for the individual honours. A brilliant attacking player, he has the capacity to beat players and score tries. Indeed, his first three Test matches back in the Azzurri blue saw a return of three tries - albeit they came in a hat-trick against Russia.

There is an argument to advance that their 31-21 pool defeat to New Zealand in the 1991 tournament was a high commendable effort but four years later in South Africa the Azzurri beat Argentina 31-25 and a central player for the Italian was their Argentine born outhalf Diego Dominguez, who chipped in with a try, four penalties and two conversions. Italy had only narrowly lost 27-20 in their previous pool match to England.

They are in an absolute pig of a group in terms of trying to escape it given the presence of the All Blacks and Springboks - they did beat South Africa in 2016 for the first time but under Rassie Erasmus the latter have moved on appreciably - but they will be expected to beat Canada and Namibia. Unless they can pull off a huge shock against one of the big guns, ala Japan against South Africa four years ago, then a pool exit is on the cards.