Pool D: Georgia out to emphasise their Six Nations credentials 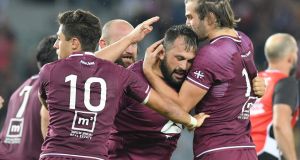 Forever caught beneath rugby’s glass ceiling, the 2019 Rugby World Cup is the perfect chance for Georgia to show they are deserving of a place at the game’s top table. The Lelos have appeared at the last four tournaments and have shown steady improvement, with their two victories in 2015 - over Tonga and Namibia - seeing them finish third in their pool and earn automatic qualification for Japan. There is a real sense that Georgia - in Europe at least - are by far and away the best team outside of the Tier One nations. Indeed, they have won 10 of the last 12 European Rugby Championships, with only Romania able to break their stranglehold on the competition.

Georgia are currently ranked 12th in the world, behind Japan and Fiji but ahead of Tonga and more pertinently Italy - the side who are finding it difficult to shake the tag of Six Nations whipping boys. However it is difficult to gauge Georgia’s improvement while they are starved of matches against heavyweight opposition. In 18 Tests since the start of 2018 they have played just three fixtures against a Tier One side, including the recent double-header warm-ups against Scotland. World Cup matches against Wales, Australia and Fiji will prove an acid test. They have also been boosted by the return of Georgian legend Mamuka ‘Gorgodzilla’ Gorgodze, who has been persuaded to come out of retirement having played his 71st and last Test in 2017. He was named man of the match against the All Blacks in the 2015 tournament and is one of 18 players in the squad with RWC experience.

Milton Haig was appointed Georgia’s head coach in 2011, after being tipped up by fellow Kiwi Vern Cotter, with his first match coming in February 2012 - a 25-18 defeat to Spain in Madrid. More than seven years later, the 55-year-old is still at the helm, and The Lelos have flourished under his leadership - dominating at second-tier level in Europe and producing their best ever Rugby World Cup showing in 2015. Haig is a big advocate of Georgia competing at the top table, and has suggested a Georgian team could compete in a franchise competition - such as an expanded Pro14, or South Africa’s Currie Cup, or Super Rugby - in order for his players to gain more exposure at the highest professional level.

Georgia’s success is largely built on an uncompromising, grizzled pack of forwards, “the biggest, ugliest, scrum pack in the world,” according to England coach Eddie Jones. However The Lelos are led on the field by a back - centre Merab Sharikadze, also dubbed ‘The Pride of Georgia.” Now 26-years-old, Sharikadze made his debut against Spain in 2012 aged 18 - a fixture which also marked the start of Milton Haig’s tenure. Sharikadze is a big, bruising inside-centre, and as well as being a fearsome presence in the 12 channel he has a soft pair of hands. His leadership will be aided by the return of former captain Gorgodze, who is playing in his fourth World Cup.

Still only 20-years-old, Tedo Abzhandadze has starred for Georgia at the 2017, 2018 and 2019 World Rugby Under-20 Championships, as well as breaking into the first team last November. The outhalf has earned seven caps since, and he is one of a crop of young backs who provide an exciting foil for a stereotypically strong Georgian pack. A diminutive 10, Abzhandadze is thrilling to watch with the ball in hand and is a creative presence at first receiver, as well as having an impressive temperament. Georgia head coach Haig believes he has the ability to become, “truly world class.”

The 2015 Rugby World Cup was Georgia’s best to date and they bookended their tournament with victories over Tonga and Namibia, earning third-place in their pool and automatic qualification for this year’s tournament in the process.

Georgia are clearly ever-improving but they’ve been landed with an incredibly difficult pool, especially with Fiji looking strong. They will be confident of beating Uruguay but it’s hard to see them picking up a result elsewhere.