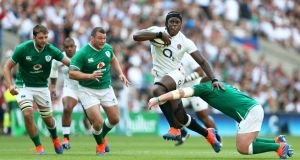 An England team packed with players from different cultural backgrounds, playing in an aggressive manner with an Australian at the helm, beating New Zealand to be crowned world champions? That’s enough about the cricketers - this autumn the rugby players head to Japan as second favourites to lift the Webb Ellis Cup, and with increasing confidence over their prospects. After a difficult 2018 campaign - England lost five Tests on the bounce, and six out of 12 overall - Eddie Jones’s side arrived in Dublin at the start of this year’s Six Nations as big underdogs. The performance they went on to deliver as they beat Ireland 32-20 emphasised their World Cup credentials. So too did their 57-15 warm-up win overJoe Schmidt’s side at Twickenham, a result which has made the world take notice.

When England bring their power game, and have everyone fit, they can beat anyone. In Billy and Mako Vunipola, Kyle Sinckler and Maro Itoje they possess some fearsome ball carrying forwards - while Manu Tuilagi is back in midfield. England’s linespeed is All Blacks-esque, impossible to live with at its best and often bringing the offside law into disrepute. But there’s a frailty to go with England’s physicality. They remain beatable as Wales and Scotland - nearly - showed during the Six Nations, but they now seem to peaking at exactly the right time.

Eddie Jones picked up England from the ashes of the 2015 Rugby World Cup and made an instant impact, winning back-to-back Six Nations championships in 2016 and 2017. Yet they hit their peak two years out from Japan, and Jones has had to undergo a mid-cycle rebuild. He has finally let go of some of his trusted lieutenants - think Dylan Hartley and Chris Robshaw - and England have flourished as a result. His contract runs until 2021, results in Japan pending - ultimately his Twickenham tenure will be judged on how far England progress.

Owen Farrell’s promotion to captain, after having the dubious honour of sharing the armband with Dylan Hartley, was long overdue. He is England’s talisman, their best player and their beating heart - the glue which holds the whole operation together. Farrell’s kicking off the tee is nerveless, as is his defending down the number 10 channel. Having operated at 12 for much of 2018 he is now back at outhalf, but his ability to play both positions strengthens England’s hand.

There are fewer more exciting players in world rugby than Maro Itoje. At 24-years-old he’s already a three-time European Cup winner, dual-Six Nations winner and Lions Test starter. Brilliant over the ball or on it, he possesses a peerless blend of physicality and athleticism. The complete modern day secondrow, he will be the cornerstone of England’s pack in Japan. This will be his first World Cup - but certainly not his last.

The 2003 Rugby World Cup final, Sydney, and England are drawing 17-17 with hosts Australia in extra-time. Matt Dawson feints, and then drops the ball back to Jonny Wilkinson in the pocket. Wilkinson drops for goal with his weaker right foot - the ball belly flops over the bar. England are world champions.

England look well set to top the pool ahead of the flamboyant but flammable French and Argentina. Wales or Australia should lie in wait in the quarters, followed by the All Blacks. Negotiate that brutal double-header and they are champions elect.