Pool C: youthful France have a mountain to climb in Japan 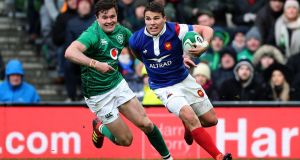 Antoine Dupont is one of the shining lights of French rugby. Photograph: Billy Stickland/Inpho

The old cliché goes, you don’t know which France side is going to turn up - but in recent years it has been fairly easy to predict. 2018 was a miserable year for Les Bleus, who managed just three wins out of 11 Tests, and signed off with a galling defeat to Fiji at the Stade de France. This year’s Six Nations campaign wasn’t much better, as they threw away victory against Wales in the championship opener before being thrashed at Twickenham, delivering an embarrassing defensive performance in a 44-8 defeat. However, there are reasons to be hopeful. France were Under-20 world champions in 2018, and have an exciting crop of players coming through - the likes of prop Demba Bamba, Romain Ntamack and Antoine Dupont. The resurgence of Toulouse - this year’s Top 14 champions - will also stand to the national side, and there is a sprinkling of grizzled experience to complement the youth. The raw ingredients are all there, and if France can combine them all consistently they will pose a threat to any side. As ever with France though, it’s a big if.

Jacques Brunel took over from Guy Noves at the end of 2017, and with Fabien Galthie - currently working as an attack coach - set to take over after the Rugby World Cup, this is essentially a free shot for the 65-year-old. Brunel’s faith in youth has been admirable, and he has not been afraid to blood many of France’s Under-20 world champions. He has made the ruthless decision to exclude Mathieu Bastareaud from his World Cup training squad, prompting the centre’s international retirement. Les Bleus are unlikely to challenge in Japan, but Brunel can help set the tone for the years to come.

Guilhem Guirado’s 68 caps make him the second most experienced player in this France squad after Louis Picamoles. Les Bleus possess a number of exciting, dynamic forwards who can cause havoc in the loose, but their set-piece often lets them down. Hooker Guirado can provide a calming influence both at the scrum and lineout, while keeping a positive dialogue with the referee. The dynamic Camille Chat is breathing down his neck but Guirado’s nous and experience make him integral to this French side.

It is no coincidence Toulouse’s return to the top table of European rugby has coincided with Antoine Dupont’s coming of age, following his switch from Castres in 2017. The 22-year-old is lethal at the base, capable of making huge yards as he snipes around the fringes, while his ball playing ability means he is also able to operate at outhalf. He made the French number nine shirt his own during the latter half of the Six Nations and is unlikely to relinquish it any time soon - he will be one of the most exciting talents on show in Japan.

France’s tournament is likely to live or die on their opener against Argentina. If they can escape the pools, a last-eight clash against Wales or Australia is likely to see them heading home.

Four Palmas players and president die in plane crash 11:10
Six Nations 2021: This feels like the real start for Andy Farrell’s Ireland 11:00
Chelsea set to sack Frank Lampard and bring in Thomas Tuchel 10:57
Six Nations 2021: Tadhg Furlong and Rhys Ruddock return to Ireland squad 10:43
The Offload: Ireland’s succession issue at 10 on show once more 10:46
Crossword Get access to over 6,000 interactive crosswords