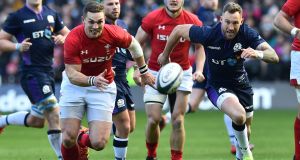 The Grand Slam dream lives on. Warren Gatland’s Wales stuttered to a 13th successive victory, their fourth in this season’s Six Nations and only Ireland bar their path to a clean sweep in a Principality stadium showdown next Saturday.

Gatland in his last Six Nations game in charge of Wales – he will step down after the Rugby World Cup in Japan later this year – has already stoked the fires ahead of Ireland’s arrival on St Patrick’s weekend. And he is unlikely to run out of fuel in the intervening period in terms of the build-up to the match.

It was a curious game at Murrayfield where the Welsh dominated for most of the first half. They deserved a far greater reward on the scoreboard against a Scotland side discommoded by injuries to fullback Blair Kinghorn and wing Tommy Seymour which necessitated a reshuffle in the backline.

The excellent Darcy Graham, a try scorer, would also retire prematurely, forcing scrumhalf Ali Price to see out that match on the wing. Against that backdrop the Scots produced a performance of substance after the interval and almost snatched an unlikely victory. They dominated possession and position but found the Welsh defence impenetrable with the exception of Graham’s 58th minute try.

The Welsh made a remarkable 160 tackles in the second half and on several occasions in the shadow of their posts. It’s possible to argue about the lack of subtlety to some of Scotland’s attacking gambits, that they got very narrow, relying on one-out runners, who were met time and again on the gain line and either stopped immediately or driven backwards to think again.

It shouldn’t detract from the commitment, aggression and organisation of the Welsh defence for large tranches of the half; Shaun Edwards deserves kudos for the effectiveness of the system and it ultimately won the game for the visitors.

What may trouble Gatland slightly looking ahead to the Ireland game was that Wales appeared to shut down mentally as if distracted by all that attends next weekend in Cardiff, albeit that it’s unlikely to be an issue with the prize on offer.

There were shortcomings in the Welsh performance that will provide sustenance for Ireland’s hopes. The lineout has been an issue throughout the tournament and once again Wales struggled to win clean ball in the set piece, having to resort to trick plays, like putting wing George North in at the front of the lineout to win a quick throw.

They lost only one but it has been a rickety platform and Ireland will be enthused by the manner in which the Scots disrupted their opponents. The box kicking of Welsh scrumhalf Gareth Davies generally drifted too long and because of the success that the visitors enjoyed on the gain line they were preoccupied with running over Scotland.

When they did get the ball to the edges they scored two tries, the first from their excellent wing Josh Adams, a glorious finish – there was a forward pass in the build-up – in which he stood up Kinghorn and left him clutching air.

The second try from Jonathan Davies was the product of frontal assault by the forwards, patient, precise, abrasive, wearing the Scots down, sucking them in, until Wales had a numerical advantage out wide. They might have scored a phase or two earlier but that’s a minor cavil; three chances, two tries brooks little argument.

In that first half the Welsh pack bossed their opponents physically, getting over the gain line relentlessly and, on the flip side, were powerful in defence, counter-rucking aggressively which caused the Scots huge problems at the breakdown.

Their line speed was varied, often using Gareth Davies at a shooter. His namesake, Jonathan, defended the 13 channel with great intelligence, often reading Scottish intentions and making a definitive intervention.

When the teams returned after the interval, few would have anticipated anything other than a reprise of the opening 40 minutes, but that never materialised.

Scots rally in second half

Scotland recalibrated their attack, initially looking to wider channels, playing with more tempo and in Hamish Watson, Allan Dell and Magnus Bradbury had players who gave the home side go-forward ball.

There are pointers for Ireland, particularly at the breakdown. Slow ball allows Wales’ aggression in defence to prosper; they suffocate teams, force errors and turnovers and have then been very accurate and precise in working the opposition over physically to rack up points.

The suggestion is that Liam Williams, outstanding in his relatively brief cameo will be fit to play, so Ireland’s aerial game will have to be on point too. The Welsh will have confidence, gleaned from winning tight matches, from finding a way to win in first applying pressure and then turning opposition mistakes into points. And on the other side of the ball, that bloody-minded defiance in defence.

Wales have been far from perfect but like all successful teams they have found a way to win, under a variety of guises and that confidence will make them so difficult to beat next weekend.