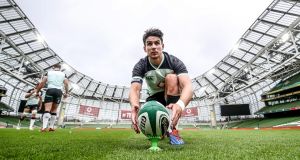 Joey Carbery during the captain’s run at the Aviva Stadium ahead of Ireland’s first World Cup warm-up match against Italy. Photograph: Dan Sheridan/Inpho

If it looks, swims and quacks like a trial, then it probably is a trial. It seems almost a tad cruel, along the lines of “They shoot horses, don’t they?” or The Apprentice, whatever about Love Island, but individual World Cup dreams could well be, to at least some degree, sealed or lost by today’s events against the Azzurri.

As if to underline the point, only a handful of today’s 23 look assured of inclusion in the 31-man squad for the World Cup, but one could envisage that more than half of them will board the flight to Tokyo.

While that may seem excessively fluid, if some players who appear to be down the pecking order have stormers today then, as Andy Farrell admitted, the coaches are duty bound to take that on board.

“Obviously we’ve got certain guys that we know and hope are going to board the plane to Japan but it would be very dismissive of ourselves if we are locked in. Why? Because the group deserve to be open-minded going into these games as well.

“Some guys worked unbelievably hard to force themselves into the squad of 45 for training back in June and they’ve all applied themselves unbelievably well. It’s going to be really difficult to narrow it down, but it’s our jobs to do that and we’ll have to do what’s best for the team. We’ve got to make sure we don’t shoot ourselves in the foot by not staying open-minded enough.”

In terms of the collective, wins today and in the final warm-up game at home against Wales would be a satisfactory return. This comes with the proviso that Ireland are competitive at Twickenham a fortnight hence after their trek to Portugal, as was the case there four years ago. And also that they’re more competitive in the Principality Stadium than last March.

As much as anything, recalling the examples of Geordan Murphy in 2003, David Wallace in 2011 and Tommy O’Donnell four years ago, the fervent hope is that no player from either side is injured. O’Donnell is an interesting case in point. As much as the debutant Jean Kleyn, he appears to be “behind the eight ball” as Simon Easterby has said of the newly qualified South African-born secondrow enforcer, but any hugely industrious and effective performances today would make compelling cases for World Cup inclusion.

As for the match itself, with Ireland making 14 changes and Italy a dozen, not to mention some capricious weather and early season, first day rustiness, this really could be anything.

Ireland are deemed 26-point favourites against opponents they’ve beaten eight times in a row, scoring a half-century in four games running before being extended to a 26-16 win in Rome last February.

“I think they’ll be physical obviously, because that’s the type of specimens they’ve got,” said Farrell. “Set piece wise, they’ll try and be cohesive and abrasive there. What they’ve tried to develop over the last while has been their offloading game and their expansive game to hit you on the break etc. Hence the tries they scored against us last year. So we have to be ready for all those.”

Yet Italy’s starting frontrow has only 16 caps between them, so they may or may not be the set-piece test anticipated.

The key for the players, of course, is to somehow blank out much of the outside noise and not treat this as a trial.

Rhys Ruddock is captaining Ireland for a seventh time and is himself vying for perhaps one of five spots from seven contenders in the typically uber competitive backrow area.

Hence, he maintained this was not a trial.

“No, not at all. At the end of the day, it is a Test match. Everyone is in the same boat. We’re all excited to get the opportunity, to put on the jersey, lay down a marker for what we’re about as a group leading into the World Cup.”

“In the back of your mind, you know the importance and the meaning of putting in a performance as an individual. The message has been clear from the coaches and everyone has bought into it that the way we progress as individuals is by performing as a team.

“We’ve seen that in some of Joe’s selections in the past. All he asks of you is to do your job and perform well, not to go off and do your own thing. That won’t get us anywhere as a team. Everyone buys into that, as a group.”

Forecast: Ireland to pull away eventually.