Springboks on verge of first title since 2009 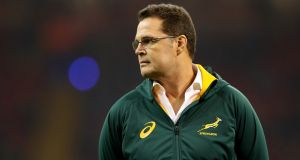 Rassie Erasmus: “It’s going to be a tough match. If we want to win the Rugby Championship, we have to get past them and we know what they did to us last year.” Photograph: Warren Little/Getty Images

South Africa’s quest for a first Rugby Championship title since 2009 is secondary to the bigger picture of the looming World Cup in Japan, but would provide a boost in confidence as they prepare to clash with Argentina in Salta on Saturday.

A bonus-point victory would secure the trophy in the shortened three-game season, while a four-point haul could also be enough based on what happens in the earlier fixture between Australia and New Zealand in Perth.

But for coach Rassie Erasmus, his focus will be on the performance of his players and how they implement his game-plan with just three matches remaining before the World Cup opener against New Zealand in Yokohama on September 21st.

He has given a window into his thinking, keeping largely the same side that played in the 16-16 draw with the All Blacks, bar an all-new front-row to counter the considerable shove of the Argentine pack.

That suggests a territory game and speed at the breakdown against a home side that have won three of the Boks’ last five visits to Argentina, including a handsome 32-19 victory in Mendoza last year.

“It’s going to be a tough match. If we want to win the Rugby Championship, we have to get past them and we know what they did to us last year,” said Erasmus.

“We weren’t great at the lineouts (against New Zealand),” he said. “Our scrums were pretty good when the second front row came on, so we would like to keep doing that. I thought we were also pretty good on our defence.

“I think if we improve on all the different facets of our game, then that’s the only way that we will eventually win the game. We would like to break it down to small little battles if we can.”

The half-back pairing of outhalf Handre Pollard and Faf du Plessis will be crucial in winning territory with kicks out of hand, though the Boks will have to be wary of the lightening quick counter-attack of Argentina.

The home side have been able to recall hooker Agustin Creevy after he recovered from a shoulder injury, while Matias Alemanno and Marcos Kremer make up a new lock pairing and Javier Ortega Desio replaces Tomas Lezana at flanker.

Prop Juan Figallo says it is going to be a bruising battle with each pack trying to wear down the other.

“It’s going to be a war, a tough game,” Figallo said. “It will be very hard on the forwards because South Africa is going to try to subdue us out there. We also have to try to do that to them.

“They are going to contact a lot to try to go forward, so the battle at that point is going to be fundamental on Saturday.”

Argentina lost their opening two matches of the Championship at home to New Zealand and away to Australia, so are out of the running for the trophy.