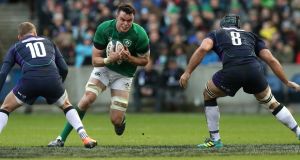 James Ryan was last night honoured as the Guinness Rugby Writers of Ireland Men’s Player of the Year at the RWI awards in Dublin, thereby making the 23-year-old lock the youngest ever recipient of the award.

Far from suffering second season syndrome, if anything Ryan’s remarkably high standards in the accuracy of his work on both sides of the ball seemed to improve during the 2018-19 season.

He was an integral part of Ireland’s autumnal wins over Argentina and New Zealand, as well as Leinster’s run to the Heineken Champions Cup final and Guinness Pro14 success.

It is a measure of his standing in the eyes of Joe Schmidt and the coaching staff that he has completed 80 minutes in his last nine Tests, which is also a regular occurrence for Leinster.

Schmidt’s decision to fast-track the Test career of the former Ireland Under-20 captain when blooding him on the 2017 summer tour to Japan and the USA, before he’d even made his Leinster debut, now looks even more prescient.

Despite the presence of so many Irish players on Lions duty, no less than 18 of the existing 43-man preliminary squad went on to that tour to the World Cup hosts, and Ryan believes that can only be beneficial.

“Yeah 2017, I was on that tour and it was great. I loved it. Mad country. It’s certainly different to playing in Europe just in terms of the environment and everything so hopefully I’ll be going back there for the World Cup.”

As to what made it mad? “I think the kind of environmental stress. Like, a lot of the work we’ve been doing so far has been strength and conditioning because of the heat and the humidity over there. It’s something that we’re not used to.”

“So the reason that we’ve done a lot of that work is to make sure that we have the stamina to excel in those conditions.”

Schmidt himself was honoured by the Rugby Writers as the recipient of the prestigious Tom Rooney award in recognition of his immense contribution to Irish rugby over the last nine seasons.

Under his watch, Leinster won two Heineken Champions Cups as well as a Challenge Cup and Guinness Pro12 double, before he coached Ireland to unprecedented success. Ireland won three Guinness Six Nations Championship titles, including a 2018 Grand Slam, claimed a first series wins in Argentina (2014) and first in Australia (2018) since 1979, a first victory on South African soil in June 2016, a first victory against the All Blacks in Chicago in November of that year and a first home victory against New Zealand at the Aviva Stadium. In November 2018 he became only the second Ireland coach to be named World Rugby Coach of the Year. Schmidt was unable to attend as he is in his native New Zealand due to a family bereavement.

Ireland, Munster & UL Bohemian backrow Ciara Griffin was recognised as the Rugby Writers of Ireland Women’s Player of the Year. The Kerry native and backrow Griffin played in all of Ireland’s Six Nations games where her on-field performances coupled with her leadership as captain ensured she was the standout player for the Irish women last season.

Cork Constitution were named Club of the Year after winning 23 of their 26 matches, claiming the All-Ireland League, Munster Senior Cup and the Cork Charity Cup, while Michael Kiernan, a major contributor to the Triple Crowns and Championships of 1982 and 1985, when his drop goal sealed the deal against England at Lansdowne Road, was inducted into the RWI Hall of Fame.

Rory Sheridan, head of partnerships for Diageo Europe, said: “We are delighted to be recognising some of the greats of the game both past and present at the Guinness Rugby Writers of Ireland Awards. In particular, we are very proud to see Joe Schmidt’s immense contribution to Irish rugby recognised with the awarding of the prestigious Tom Rooney award. He and the Irish men’s team have very challenging but exciting months ahead. We want to wish him and the team all the very best in the upcoming Guinness Series and the Rugby World Cup in Japan.”

Men’s Player of the Year: James Ryan (Leinster and Ireland)

Dave Guiney Team of the Year: Ireland Under-20 Mens

Club of the Year: Cork Constitution