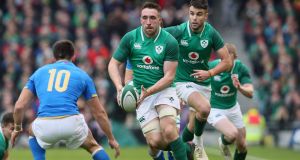 Straight shooter Jack Conan says players will not become too fixated with results over the next four matches, says the manner of a team that loses can also be important. Maybe. But fans might become fixated. Spectators will be looking at the way the scoreboard is turning.

Coming off a final, crushing (25-7) defeat to Wales in the Six Nations Championship a day before St Patrick’s Day, Ireland’s try came from Jordan Larmour in the 83rd minute, Jack Carty’s conversion in the 84th minute. Results, with due respect for needing to peak during the World Cup, would seem to be paramount for the Irish players over the next five weeks.

A shunt forward of momentum. A positive spike. A compilation of score lines that can show an upward sweep. Public sentiment at least believes the Irish squad needs it, a winning tonic. Maybe not this weekend against an Italian side Ireland have beaten 24 times since 2000, but surely when they face England in Twickenham on August 24th. The result will be everything. No?

No it wasn’t in the best scenario in a final game of redemption, where Ireland were not redeemed but more widely exposed than they were against England in the first match of the championship. Those old wounds are still in the short-term memory and what they do is cast some doubt.

Wales, particularly and England have made a doubting Thomas of us all.

“The manner that you lose at times says more than the score line,” he explains. “We’ll be going out to win every game. We’re not in the position we are in the world rankings without going out and winning some difficult Test matches.”

Conan is right and any minute now there could be a chorus of fine margins to win and lose games. How well we all understand that. But one of the number eight’s endearing characteristics is that when he is speaking he apologises for clichés. He sticks with his opinion. But surely dampened public perception leaches into and oozes towards the heart of the squad.

“I don’t think it massively does,” he explains. “I don’t think you can worry about everyone’s opinion. Obviously we’re going out there to win every game and be at our best. It’s the start of the season. Things might be a bit slow.

“If everything doesn’t go our way, we’re not going to let it bog us down. I’m sure, regardless of public opinion, straight off the bat everyone will be backing us once we get to Japan and the country will be behind us.”

That is certain. An ounce of doubt does not mask a national yearning for something better than a quarter-final. And no amount of doubt can bleed out an enthusiastic band wagon.

But firstly, Conan’s blinding ambition is to be on the plane to Japan. After that comes the vexing question of number eight or flanker. He points out that in the game he prefers to forget against Wales, he came in for Sean O’Brien and the finishing backrow was himself, CJ Stander and Peter O’Mahony.

There will be a head to head with the Munster number eight. But Conan’s largely injury free season with Leinster has given some confidence and taught him to ditch extraneous matter. All the time he will go in shaved and tapered and willing to compete.

“If you don’t believe in yourself, no one else will,” he says. “I definitely see myself being able to lock down that position. Once I am given an opportunity, as I have been throughout the year, I think I have shown I am more than capable of doing it. I was fortunate enough to go on tour two years ago and play in Japan.

“That kind of hard ground, hot day suits me. It is nice open, quick rugby. I feel that brings the best out of myself. I’ve always performed really well in those conditions. It is setting up to be a really exciting campaign in the World Cup, if I get the nod to go. There is still a lot of work to be done between now and then. But, CJ is some player as well and he has been fantastic for Ireland every time he has gotten the opportunity to play. I look forward to battling it out with him.”

No bragging. No bravado. Just a straight shooter.

1 Ken Early: Liverpool fans, Bamber Gascoigne and a close shave in Istanbul
2 As news gets better, can the pull of The Field be resisted?
3 The Offload: Philip Browne’s grave outlook should be taken seriously
4 Tiger Woods and Peyton Manning hold their nerve in $20m Covid-19 charity match
5 From TB to polio: GAA is no stranger to disease disruptions
Real news has value SUBSCRIBE

Premier League must share wealth to ensure English football’s survival 10:54
All in the Game: Did Rory Delap’s long throws cause the 2008 financial crash? 10:00
The Offload: Philip Browne’s grave outlook should be taken seriously 10:00
Cricket ban on using saliva to shine ball will only be temporary 08:41
UK government says elite athletes must be allowed to opt out of contact training 08:14
Here is your handy guide to sport on television this week