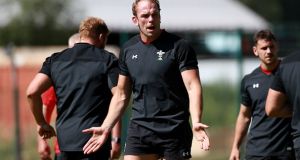 It will be lock Jones’ 135th Test match appearance — 126 for Wales and nine in British and Irish Lions colours — to overtake prop Gethin Jenkins.

Wales head coach Warren Gatland has named a team that includes 13 starters from the Six Nations title and Grand Slam-clinching victory over Ireland in March.

The only players who did not feature in the starting XV against Ireland that run out at Twickenham are prop Nicky Smith and flanker Aaron Wainwright.

And it means Gatland parades a side that includes the likes of established stars such as Jones, fullback Liam Williams, wing George North, centre Jonathan Davies and flanker Justin Tipuric.

Wales face a return appointment with England in Cardiff on Saturday week, then meet Ireland home and away.

Gatland is currently overseeing a 41-man training group before cutting that number by 10 players and announcing his final World Cup squad on September 1.

Gatland said: “The squad are looking forward to this weekend and getting a game under their belt after a really intense preparation period.

“We have picked a strong-looking team and we are looking forward to seeing how they kick on after a successful couple of campaigns.

“These matches are really important leading into the World Cup to ensure that both the players are ready for the tournament, but also to give players opportunity to put their hands up for selection.

“There is a balance with selection, a need to mix continuity from what we have achieved, and opportunity, and we will look to do that over the next couple of weeks.

“Looking at the first two matches, this block replicates what we are doing in the RWC with a six-day turnaround, so it’s a good opportunity for us to prepare and mimic that schedule.”