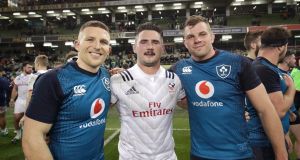 Ten years later, and the rare sight of old pals Jordi Murphy and Andrew ‘Bomber’ Conway together in casual Ireland garb accentuates the unpredictability of any rugby career.

In 2009 Murphy captained a Blackrock College team starring Conway to a Leinster schools title. That group produced another four professionals, not a single one of them settling into local blue colours.

“We went our different paths but we are sitting here preparing for a World Cup so it has worked out all right,” said Conway, a Munster player since 2013.

As a lethal teenage combination both of them promised to be exactly where they currently reside. Of course that guarantees nothing in these nervy pre-World Cup days.

Murphy is in Ireland camp calmly fighting for his career moment (part two, nobody mention the 2015 quarter-final) after establishing himself as Ulster’s starting openside last season (true, he’ll make or miss the World Cup squad based on Saturday’s performance at number eight).

Conway sparks of magic would have earned him at least treble his 12-cap haul – Murphy has 27 – if not for a string of ill-timed injuries.

The other boys of ’09? Brendan Macken is at London Irish while Dave Heffernan and Denis Buckley are Connacht frontrowers with the final piece from that excellent schools side becoming a US Eagle.

Murphy remembers: “You scored a hat-trick last year against America. That was an interesting one because we played against Dylan Fawsitt. The three of us played senior cup together.”

Forever labelled a jack of all trades, even playing lock in those underage days due to a glut of talented flankers, such versatility should finally pay off for Murphy despite the notable selection of Tadhg Beirne as backrow cover against Italy.

To guarantee his plane ticket to Japan, Conway needs Joe Schmidt to be satisfied with two outhalves as it looks like Chris Farrell will be the fourth centre inside Ireland’s 31-man cut. If Schmidt goes for an 18 forwards and 13 backs split the window of opportunity almost certainly closes.

Human nature has members of the current 43-man panel looking around the team room trying to figure out who will be sacrificed next.

“It obviously gets talked about amongst the lads but we don’t talk about it in meetings,” said Murphy. “There is only 31 places. It’s about putting our hands up at every opportunity. Fingers crossed we can get ourselves over there.”

At least five of the 23-man squad to face Italy will probably miss the cut. That can rise to seven or eight should Schmidt’s head be turned by multi-positional options like Will Addison or John Cooney.

Saturday’s starting backrow could conceivably miss out entirely if Beirne gets the last slot after Kleyn forces his way into the secondrow quartet.

So, breaking it down, Peter O’Mahony, CJ Stander, Jack Conan and Josh van der Flier are certain Ireland backrowers with one or two from Murphy, Rhys Ruddock, Tommy O’Donnell and Beirne joining them.

“It’s great to have the versatility on my side – I’m happy to be able offer that,” said Murphy. “Joe said to me he knew I’d been playing seven a lot this season but its number eight this weekend. My answer to that was: I just want to play.”

It’s just as tight for Conway with Rob Kearney, Jacob Stockdale, Keith Earls, and Jordan Larmour looking like certain selections. The evidence points towards one from Conway, Dave Kearney, Addison and Mike Haley travelling to Tokyo next month.

Considering Joey Carbery and Robbie Henshaw can cover 15, while Larmour wears that jersey this weekend, the margin for error narrows significantly.

“I can only speak for myself,” said Conway. “I am not thinking this could be my last shot. If I put in the performance that I want to put in it won’t be my last shot. That’s the mindset that I prefer to go with and I train my mind, in the mental practice I’d be doing, for that to be my subconscious and conscious thoughts.”

Ten years later, via very different paths, Murphy and Conway are exactly where they deserve to be. No guarantees but enormous opportunity.