Australia series: Up to nine changes expected as Ireland prepare for Melbourne test 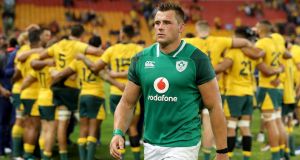 This Irish squad had been something of a machine during the course of a high-achieving, high-demanding, unbeaten, Grand Slam-winning, Leinster double-winning regular season, but they’re not robots after all. Rebooting for an end-of-season summer tour against a fresher Wallabies on Aussie soil was a big ask, and winning a first ever three-Test series here has just become bigger again following Saturday’s 18-9 defeat.

Ireland seem likely to make up to eight or nine changes, not only in making more use of the 32-man squad but to also spark a response. Most, and possibly all, of the six Leinster men confined to bench duty, along with Devin Toner, Dan Leavy and Garry Ringrose, are likely to start in Melbourne’s AAMI Park next Saturday, and it could be that the uncapped Tadgh Beirne will feature as well.

But, either way, as the Lions tour last summer demonstrated, it can be done. Sure, the Wallabies – whom Joe Schmidt described as “pretty inspired” – will be buoyed and theoretically ought to only improve, although whether they can again bring the same emotional pitch they brought to the first Test of their season a week on remains to be seen.

If nothing else, 1-0 down with two to go clarifies the picture for Schmidt and his squad. “Yeah, it’s not probably the clarity I was looking for to be honest,” said the head coach ruefully in the corridor between the two dressingrooms in Lang Park on Saturday night.

“It’s one of those things that it is tough mentally to get back up now because you are under pressure. The Wallabies will have a spring in their step. They know what they did tonight that caused us problems and put us under pressure but they’ll also know that there were a few times that we opened them up and caused them a few problems.”

In that context, Schmidt lamented Ireland’s failure to turn line breaks into tries in an uncharacteristically wasteful performance, whether being held up over the line as CJ Stander was early on the second half, thrice kicking balls out on the full or failing to clear out ruck ball.

“If we can amend some of that stuff then hopefully we can apply a little more pressure and take the spring out of their step a little bit because I think when they’ve got a spring in their step they’ve got some athleticism that can be very hard to contain.

“So it’s probably not the result we’ll look at, it’s those elements of the performance that we can try to do something about because the result at the end of the day is whatever it ends up being. Hopefully we’ll exorcise a few frustrations as well that came out of today so that by Tuesday we’ll turn around and we’ll be looking forward rather than back,” said Schmidt, in clear reference to a plethora of debatable calls by referee Mariuks van der Westhuizen.

The spring in the Wallabies’s step which Schmidt had in mind belonged to the Wallabies fullback Israel Folau, whom the Irish conceded was virtually uncontainable, especially as opponents can’t “usher three or four guys out there, you’ve got to defend what’s in front of you”.

“I’ve got to say they were pretty well inspired tonight in the physical edge they brought and when you’ve got the athletes they have it makes it really tough.

“So we will dust ourselves off, there were some quiet positives from the game and I think there are some guys who will learn a fair bit from it as well. We did look a little bit out on our feet, a little bit underdone, a couple of guys who hadn’t played for a few weeks. I think they [the Wallabies] are in a match to match rhythm, [whereas] probably Bundee and Robbie haven’t played for five or six weeks, and there’s a few others as well. So from that perspective, hopefully with that game under their belt they’ll just have that little bit more rhythm and we’ll be that bit more resilient.”

All bar Leavy (who has been through weekly wars in recent months) of the 32-man squad were involved in Saturday’s warm-up, although Schmidt maintained the flanker could have played. “We’ve been nursing him along a little bit. There’s a couple of guys, like Tadhg Beirne, who’s just had massive minutes. There’s a few guys who are probably part of a longer-term plan through the tour.

“Because if we don’t take this opportunity I just don’t think we get another one. When we get round to the November series there’s a couple of really big games for us and then the Six Nations, that’s over 100 years old and you don’t disrespect the Six Nations and not take it really seriously. We’ll have Dan available and Tadhg and a few other guys, so we’ll have a look how guys come through today and make some decisions.”

1 Tuilagi case shows England’s home-based clause is out of date
2 UK Sport to investigate ‘deeply troubling’ allegations of abuse in gymnastics
3 Tipping Point: DeChambeau’s transformation raises questions, but who will ask them?
4 Cam Newton broke the mould: Can his flame be rekindled at the Patriots?
5 The Game Changers: Vincent O’Brien, a pioneer who took Irish racing to the world
Real news has value SUBSCRIBE

Chelsea hold on to fourth but not without a scare at Palace 20:31
Clubs can now report prohibited county training directly to GAA 18:58
Women’s British Open to go ahead but without fans 17:16
UK Sport to investigate ‘deeply troubling’ allegations of abuse in gymnastics 18:04
Tuilagi case shows England’s home-based clause is out of date 16:48
Crossword Get access to over 6,000 interactive crosswords