Ireland avoid relegation as they hold off Japan’s flying finish 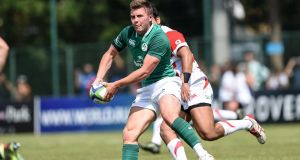 Ireland centre Seán O’Brien makes in action during the relegation playoff against Japan at the World Rugby Under-20 Championships in Beziers. Photograph: Alexandre Dimou/Inpho/World Rugby

Ireland survived a tense finale to preserve their status as an elite team for next season’s Under-20 World Championship in squeezing home in their relegation tussle at Beziers to finish 11th in the 12-team tournament. Japan drop down to the Under-20 World Trophy tournament next season.

Ireland led 22-12 at half-time through tries from scrumhalf Jonny Stewart, Trinity hooker Dan Sheehan and UCC centre Peter Sylvester and when outhalf Harry Byrne (19 points) kicked them out to a 31-12 lead in the second half it seemed that Noel McNamara’s side would be given some latitude to enjoy the final quarter of the match.

However Japan’s young Brave Blossoms were exactly that and thanks to a significant contribution from their Tongan born wingers Siosaia Fifita (two tries) and Halatoa Vailea’s five-pointer, the latter in the 72nd minute, it made it a one-point game with Ireland leading 34-33.

The Irish team showed impressive character and composure to give left wing Tommy O’Brien a chance to squeeze over in the corner and when debutant Dylan Tierney forced a last-minute penalty at the breakdown, the tension of the occasion was released in the heartfelt celebrations.

Ireland’s outstanding captain and number eight Caelan Doris admitted: “It was incredibly tough. That last defensive set we were all out on our feet. Thankfully Dylan came in with a jackal and won it for us.

“So we knew it was going to be a tough battle and we’re delighted now to finish on a high. We had a very tough group, three really physical teams in France, South Africa and Georgia. Unfortunately we came up short but [I’m] delighted with the character the boys have shown to bounce back, and to make sure the lads next year are back in this competition is great.”