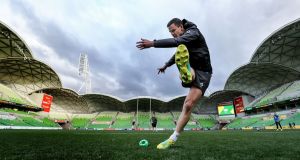 A previously all-conquering Irish side go into their make-or-break second test against the unchanged Wallabies in unusual terrain but with some familiar factors at play. A huge Irish contingent is forecast, perhaps around half of the 30,000 or so attendance in this Aussie Rules dominated city, along with rain.

Acquainting themselves again with defeat left a bitter taste last Saturday, and while there may have harboured some misgivings about refereeing decisions, more pertinently this Irish squad realised their performance came up well short of the standards they set in winning the Grand Slam. They are also aware that another defeat will see Australia replace them in second place in the world rankings.

Accordingly, their motivation will be fuelled with anger, more with themselves than the opposition and notions of vengeance. The eight changes in personnel, along with a couple of positional ones, demonstrate that this tour also had a longer-term investment in mind, but that in some respects there’s no tomorrow either. At the same time, as Peter O’Mahony stressed yesterday, last Saturday hasn’t erased anything that went before.

“We’ve done a lot of good stuff this year that you can build on and you don’t become a poor team overnight. We know for a fact that there are a lot of things in the game last week that we could have done better and they’re the things we’ve tried to focus on this week and try and improve on; things we did last week that are uncharacteristic and need to be addressed and put right.”

The changes should help.

Cian Healy and Tadhg Furlong will bring an anger to their work in spearheading an Irish scrum which was targeted by the Wallabies pack last week, and to telling effect. Dan Leavy’s return should bring the kind of no-holds-barred energy and work-rate which he has been producing on a regular basis in the second half of the season. He’s probably never come up against a stronger backrow foil, particularly at the breakdown, than David Pocock, not least in tandem with Michael Hooper. But we know that will only galvanise him.

The Wallabies have traditionally struggled in the wet, although they have the ball carriers and, as they showed last week, the kicking game to adapt. That said, it would be no surprise if Ireland seek to retain possession through one-off carries and runners off Conor Murray. With more support to clean out at hand, this might negate Pocock’s threat to some degree.

Ireland will have to be ruthless in their clearing out, akin to Leinster’s work against the Scarlets in their European Cup semi-final. Johnny Sexton should bring more variety to Ireland’s kicking game and he also has the experience now, as well as special awareness and skills, to take the ball to the gain line and bring others into play, so testing the Wallabies defence more, with the footwork of Garry Ringrose to add more variety to the threat out wide.

The Blarney Army can be a factor too.

“Obviously there’s a lot of people living over here and the crowd last week was incredible, one of the end stands was almost full of Irish people,” noted O’Mahony, who added: “It’s not something we take for granted, we’re very appreciative of the support we get. I met a couple from London last week who came out for the game at the weekend and back home again. It’s an incredible effort and expense they go to and it’s not something you take for granted.”

This is the last test of its kind, away to a southern hemisphere superpower, before the World Cup. And as well as the tactical challenge, this second meeting is liable to be as much a mental test. It’s not a given that the Wallabies can bring the same emotional pitch to the party as they did on for last week’s seasonal opener. But by the same token, the main doubt about this Irish team is whether there is any mental fatigue after such a run of big games.

But if not, they have the all-round game and players to level the series and ensure the final week in Sydney is not something of a damp squib.