Melbourne Letter: Aussie Rules the heartbeat of this great city 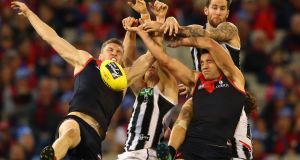 Action from the Melbourne Demons versus Collingwood Magpies AFL match which attracted over 83,000 to the Melbourne Cricket Ground/ Scott Barbour/AFL Media/Getty Images)

Aussie Rules, or simply ‘football’ as it’s known hereabouts, does just that, but you only realise the extent of its dominance in the Australian psyche when here.

Melbourne is where the game’s origins can be traced back to 1858 and from March to October the ARL Premiership dwarfs other sports on a daily basis.

Last Monday was a Bank Holiday in Australia to celebrate the Queen’s birthday and one of the highlights was a derby between Melbourne and Collingwood in front of a crowd of 83,518 at the Melbourne Cricket Ground.

Many supporters of both clubs wore blue and white hats with the letters MND as part of a charity campaign fronted by Neale Daniher. A former Australian Rules footballer who played with Essendon, Daniher coached Melbourne FC from 1998 to 2007. The pre-match entertainment saw 18 coaches plunge into a giant ice bath, and all told Daniher has inspired Australians to donate Aus$2million (€1.3million) to help find a cure for motor neurone disease.

Melbourne is home to nine of the Premiership’s 18 clubs, along with Geelong, about 50 miles south east in Victoria. Although several clubs are named after suburbs of Melbourne, supporters’ affiliations are more random nowadays, perhaps due to a familial connection or just personal choice.

Up in the cheap seats (Aus$25/just over €16) in the penultimate row of the steepling MCG, some groups of mates, boyfriends and girlfriends, were rival supporters.

To this uneducated eye, the two 17-a-side teams seem to follow the action like a vast swarm of bees after a honey pot. Only reading the reports the next day did you realise that there is actually a defence, midfield and attack. Every club is referred to by its moniker, ie the Melbourne Demons or the Collingwood Magpies. More colloquially, they are known as the ‘Pies’, as Australians like to have nicknames for nicknames.

Melbourne came into the game in fourth place, on the back of six straight wins, but these were against six of the bottom seven sides, and Collingwood led from the start, ultimately winning by 133 to 91, prompting the headline in the Herald Sun: “Demons exposed on the big stage.”

The Pies moved up to fifth and are fancied to return to the play-offs.

The Socceroos World Cup has muscled in alongside ‘football’ as their World Cup opener against France kicks off on Saturday (clashing directly with Australia-Ireland second Test) while half an hour earlier there will still be 80,000-plus at the MCG for the Hawthorn Hawks (11th) against the Adelaide Crows (10th).

Melbourne can legitimately claim to be the sports capital of the world, as it hosts the Australian Open tennis (the Rod Laver arena is adjacent to the MCG), the Melbourne Rebels (AAMI Park is in the same vicinity), the Melbourne Storm rugby league team, the Australian Grand Prix and has a vibrant horse racing scene in addition to the national obsession that is the Melbourne Cup.

With 4.75 million inhabitants, the city boasts the second highest Asian population outside of Asia in the world and so, as you’d expect, Asian food is outstanding, but then so too are their Italian restaurants.

“I’m in charge of getting restaurants,” Devin Toner revealed during the week. “Me and John Ryan. ” He picked a good spot, albeit you can be spoilt for choice in this city. “Yeah, there’s too much.”

Likewise, cafes proliferate (though wi-fi and sockets are not always plentiful) and coffee is uniformly good.

“I’ve been on a coffee tour,” says Cian Healy. “Someone at home has been sending me places to go. So if I have an hour free I head out for a coffee and take in a bit of down time.”

He recommended a place called Patricia. No sign on it. Standing room only in a little alleyway.

Even with a week here you’re only dipping your toes. Voted the world’s most liveable city – for the seventh year in a row in 2017 – according to the Economist Intelligence Unit, it’s a vibrant city for sports, arts, and tourism, and aside from the MCG museum, other tourist attractions include the National Gallery, State Library and much more.

It has a huge tram and train network, and the internal city loop tram line is free. The cliff-hugging, Great Ocean Road drive, about 90 minutes from Melbourne, is meant to be jaw-droppingly spectacular.

It’s a way more relaxed city at night time than Brisbane. There you need a passport or plastic driver’s licence to be granted access to pubs. The doormen can be heavy-handed, even when stationed under a sign reading “Céad Mile Fáilte” in an Irish  bar.

In another pub, the doorman said: “You should do what I do?”