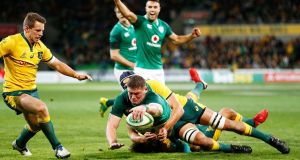 The machine was back in working order, and so slick and well-oiled did it look that there could be no disputing the merit of this win over the Wallabies in Australia. In the process, they ended a run of 11 successive defeats dating back 39 years against their hosts on Aussie soil, held on to the world’s number two ranking and, most importantly of all, set up a series decider in a sold-out Allianz Stadium in Sydney next Saturday.

Overcoming the early blow of a seven-pointer after 83 seconds, Ireland responded with a 13-point salvo while Marika Koroibete was yellow carded and never surrendered the lead thereafter. True to type, they had 60 per cent of both the possession and the territory.

Their speed to the ruck and accuracy of their recycling - with the number on the shirt irrelevant - negated David Pocock’s influence, and helped generated often lightening quick ball for Conor Murray and Johnny Sexton to marshal proceedings.

Sexton took the ball to the line and kept the Wallabies defence guessing. Indeed, the number of penalties Australia conceded for tackles off the ball (amongst a myriad of other offences) was actually testimony to the way Sexton always had a variety of runners off both shoulders.

In total, the penalty count was 15-12 to Ireland, with 33-year-old New Zealand referee Paul Williams and his officials bafflingly inconsistent, but even so that was the main blemish on Ireland’s copybook, not least as both Cian Healy and Jack McGrath were binned.

But the scrum went better, with Joe Schmidt yet again vindicated in his selection of Niall Scannell, whose early involvements were the springboard for a big night for him.

Tadhg Furlong had an immense game (12 carries for 38 metres and his first test try), while James Ryan and CJ Stander seemed to be continually involved, and Peter O’Mahony had a bigger impact on the breakdown than anyone.

The forecast rain never really materialised, and although the supporters had to be well wrapped up, although many still hadn’t taken their seats come kick-off. If so, they missed the opening try, as Ireland also missed the kick-off, Devin Toner failing to gather in Bernard Foley’s hanging kick and worse followed when Australia quickly went through the phases off the ensuing lineout.

When Foley ran laterally at Leavy it created a hole which Stander couldn’t fill, and Kurtley Beale steamed onto his outhalf’s deft little switch pass to cut through and roar past Rob Kearney to score under the posts.

However, Ireland earned a scrum from their restart, and with Sexton varying the point of attack off rapidly quick ruck ball, Koroibete lifted Rob Kearney and drove him into the ground. He was lucky the Irish fullback landed on his shoulder. A yellow card ensued and Ireland made the most of it.

Going to the corner, the pack mauled off James Ryan’s take at the tail, Conor Murray sniping to an under-armed Wallabies blindside to loop a skip pass over Sexton, and also Will Genia, for Conway to score in the corner, although Dan Haylett-Petty landed heavily on him. Conway was taking treatment at the next two breaks in play, and he was soon replaced by Jordan Larmour.

To the delight of the massed banks of green at that end, Sexton levelled with the touchline conversion and, after a big gallop by Ryan, then kicked Ireland ahead when the Wallabies’ front-row went to ground at the first scrum.

He added another two penalties when Caleb Timu was twice pinged, first for holding on when O’Mahony latched over the ball, and then for a fairly blatant, diving one-handed knockdown, in quick succession to make it 16-7.

But the Wallabies worked themselves up field through penalties against Furlong, for going off his feet, and Toner for tackling the man in the air, and Williams not only awarded a penalty try, but sinbinned Cian Healy for bringing down the lineout maul.

But the Wallabies lost Will Genia with an arm injury, while Timu was becoming a serial offender, taking out Ryan off the ball, only for Sexton to hook his straight-ish 40 metre penalty wide.

However, Foley’s decision to tap a penalty was compounded by O’Mahony winning another turnover penalty. Alas, Ireland couldn’t convert Furlong’s 40 metre break off Ringrose’s skip pass, when perhaps the prop could have popped the ball after Ringrose switched back to his outside. Pocock ended this siege by winning a turnover scrum, despite going off his feet and playing the ball on the deck.

Jordi Murphy replaced Dan Leavy at the break, while Michael Cheika made a double substitution, bringing on Tolu Latu and Lukhan Tui at hooker and number eight. Ireland renewed at a fierce lick, but Pocock won a relieving penalty, and when they went to the corner after a multi-phase attack with one of many high tackles by Beale, Izack Ruddo picked off the throw by Rob Herring, who had just come on.

How Hooper avoided a yellow card for then coming in from the side after Scott Sio’s tackle prevented Herring from touching down was a mystery, while also adjudging Jack McGrath had made a double movement before touching down. Ireland opted for a scrum off the penalty, and hammered away off 15 phases, but TMO Ben Skeen deemed Keith Earls knocked on when brilliantly squirming through Folau’s tackle to seemingly touch down. Finally, after Murray had been held up just short, the scrumhalf’s flicked reverse pass off the deck saw the magnificent Furlong barrel through Nick Phipps for his first test try.

Talk about well-earned. Sexton converted it too, to make it a two-score lead at 23-14.

Now the chant was Stand Up for the Boys In Green. It was like a home match.

Furlong gathered an Australian fumble and charged again like a Rhino. Ireland were gathering steam again, before Henshaw knocked on. Even so, shortly after the introduction of Tadhg Beirne in the backrow for O’Mahony, Murphy won a huge penalty at the breakdown with which Sexton made it 26-14.

The TMO did spot McGrath playing the ball illegally at the base of a ruck, but whereas Wallaby players avoided such punishment for same, the Irish prop was binned. The Walllabies built up a head of steam for Taniela Tupou to crash over and Foley’s conversion made it a five-point game.

That meant one last throw the dice from the Wallabies, Ringrose typifying the desperate resistance by throwing his body in the way of Koroibete and Andrew Porter following suit before final fumble by Samu Kerevi.

In truth it shouldn;t even have come to that. The Irish players went to the end of the pitch where they had been defending in the second-half to salute the thousands of fans, mostly ex-pats, who serenaded them with Ole Ole Ole.

It was going to be a good night in Melbourne.