To genuinely compete for the 2019 World Cup, we need 34 Test-standard players 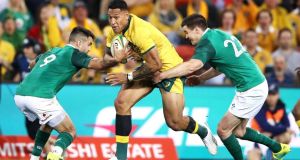 Ireland could have won in Brisbane, should have is a leap in the air with Israel Folau. That was the difference, the Wallabies’s best players; Folau off their aerial attacks along with double damage inflicted by David Pocock and Michael Hooper.

Ireland were ready for Folau – Rob Kearney contesting as well as anyone can with the great fullback – but the opensides outclassed our backrow.

The only man in European rugby currently comparable to Pocock is Dan Leavy, with Tadhg Beirne next on the list of breakdown experts.

Neither made this match-day squad so, presuming both are fit, they might feature in Melbourne and Sydney.

Alternatively, we challenge Australia in another facet by targeting their two poachers. Whenever Wales put Justin Tipuric and Sam Warburton in together we came up with a simple plan: they can’t steal or even slow our ball if they are at the bottom of rucks. Make them tackle. Leinster faced this against the Scarlets, albeit to a lesser degree, with Beirne and James Davies. One option is to instruct someone like James Ryan to track and deal with Hooper/Pocock before they can latch on to the ball.

Ireland might tighten up. Does playing an open game suit us or our opponents?

Either way, the next starting XV will be fascinating.

Regarding Folau’s impact, this morning’s review session might examine how Ireland give Australia possession. Change the type of kick, instead of first or second receiver, push it to the wider channels before putting boot to ball. Rather than kicking to contest, kick low to the ground with a pressure chase.

Sounds like an easy solution, but the Wallaby defence did force Ireland to kick long when they didn’t want to. That brings the breakdown into focus, what was happening two or three phases before the kick, who was dominating those moments?

Winning is a habit no team wants to break but I think this series is more valuable than maintaining an undefeated record. We are getting some sense of Joe Schmidt’s overall plan from the team used at Suncorp.

Schmidt had to examine his depth chart at some point. Joey Carbery getting to wear number 10 in a brutally tough Test match, and I saw him learning the subtle nuances required to run a game at this level.

Ireland have about 24 players that could feature against any opposition and victory would follow. That day in Chicago proved as much (no Sean O’Brien, Peter O’Mahony or Paddy Jackson) but if we are going to genuinely challenge for the Rugby World Cup, then the number of proven internationals has to be about 34, like the All Blacks’s strength in depth.

Ireland’s ultimate goal just became way more difficult to achieve. See the Rassie Erasmus bounce in full effect with the Jacques Nienaber-coached Springboks beating England at Ellis Park. Full proof that six months is all it takes for a dramatic turnaround in elite sports. It’s all about finding a common goal for players to thrive under. Making Siya Kolisi captain has already proved a masterstroke by Erasmus.

So, while Ireland could have won in Brisbane, small victories will have to suffice. Carbery played well, he missed one of four shots at goal in a razor-tight Test match, which is hardly a damning return. He picked out his runners and while Johnny Sexton might have altered the tactical approach mid-game – there seemed to be space in behind – Carbery’s performance was an encouraging entry into this pressure cooker environment.

Schmidt went deep into hooker and tighthead reserves by giving essential exposure to Rob Herring and John Ryan. Such men must ask questions of Rory Best, Seán Cronin, Tadhg Furlong and Andrew Porter if Ireland are to be successful at Japan 2019.

On recent performances the gap between definite starters like Sexton, Conor Murray, Best, Furlong and others in their positions is glaring. They are undroppable but they are not unbreakable. Ideally, we need 34 Test-standard players who can be dropped into the team without any unit – be it frontrow or halfback – losing its impact.

See New Zealand, and only them, because no other nation has achieved those levels of efficiency. Even they were exposed by injuries at lock and midfield in Soldier Field.

Winning the Grand Slam and Leinster conquering Europe helps Ireland to think bigger than ever before – the next step on that upward curve can only be world dominance.

Tighthead and outhalf; there are no positions of greater significance (maybe scrumhalf so expect John Cooney to feature) and this was probably Schmidt’s last clear chance to mine for additional resources 15 months out from the tournament that will define his time as Ireland coach as much as the Grand Slam.

Ireland’s punishment for so many changes was reflected in the performance. Gone was the clinical edge of Twickenham or Leinster’s end of season victories when players were not thinking about patterns.

That’s because they were ingrained. Such fluency was lost and with it went the Test match.

Not to worry. The potential medium-term benefits outweigh defeat.

Michael Cheika and his defence coach Nathan Grey are not men who show their emotions in public but they must have been purring Saturday night. Cheika got the work rate he desired while the Wallaby defence enveloped the Irish attack.

Ireland refused to be spooked, kept chasing our 2018 standards and eventually picked them apart.

We had chances. Keith Earls may have been struggling after a head knock but if he didn’t have to check his stride, from Jacob Stockdale’s pass on 24 minutes, he is six or seven metres further up field, and instead of trying to chip Folau, he’s in a sprint for the corner.

Folau probably gets him but so close to the line and with the Wallabies disorganised a try should have come. That’s 10-3 instead of 6-3 after Pocock was penalised for latching on to Henshaw. Different game. (Worth noting, the refereeing of Marius van der Westhuizen was terrible for both teams).

The immediate need to win means changes are guaranteed this week. Yes, a series win would be nice but picture the eve of a Word Cup final and listening to our players saying the lessons learned in Australia proved the catalyst for a special end to the Schmidt era. That would be pure delight, this is only fascinating to watch.