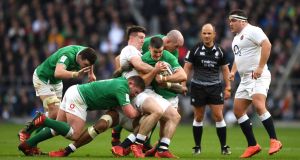 Ireland’s Johnny Sexton is tackled by England’s Tom Curry during the Six Nations match at Twickenham back in February. Photograph: Shaun Botterill/Getty Images

We’ve seen the pictures of a new, beefed-up Johnny Sexton, but according to Andy Farrell it’s as much how the Leinster and Irish captain has worked on his mentality during shutdown which augurs well for the future.

The 34-year-old will not only have designs on leading Leinster and Ireland through the next year, but on making a third successive Lions tour also, not to mention using this extended break to elongate his career.