Ground is deep in the bosom of the Pink City, and in French rugby’s southern heartlands 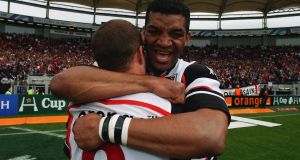 While reporting on the initial matches in Pool D of the 2007 World Cup, taking in a game between France and Namibia in Toulouse mightn’t seem like much of an occasion. But viewed through the prism of Ireland’s grim start in Bordeaux it was like an escape from prison. It was a memorable night in a great stadium, but then it’s all about context.

As any Irish rugby fan who has supported their province abroad in the Heineken Champions Cup will testify, one of the great joys of that competition has been to expose us to club grounds in the south of France. There’s nowhere like them, and that certainly includes the comparatively soulless and grey concrete slab that is the Stade de France in Paris.

For example, the Yellow Army always packs the Stade Pierre Michelin in Clermont to the rafters well before kick-off and make an almost constant, deafening din which once upon a time helped the home side to an unbeaten home run of 77 games from 2009 to 2014.

Irish teams have been more frequent visitors there over the years than to le Stadium, which is normally home to the city’s football club but which has also hosted World Cup games in both rugby and football. It also has the attraction of being in the Pink City.

A municipally owned ground which was purpose built for football and rugby, le Stadium has no running track and when the amphitheatre is packed with circa 37,000 spectators it provides a real sense of occasion for the club’s European knock-out ties.

Munster were the first of the Irish sides to go there in the 2002-03 semi-finals. They had earned that tie the hard way, coming through the pool stages by dint of their 33-6 win in the Miracle Match over Gloucester and then avenging the previous year’s loss in the final to Leicester and the Hand of Back by dethroning the Tigers in their own Welford Road lair at the quarter-final stage.

Being sent to Toulouse, and a stadium which is a home from home, was a cruel reward. Outside the ground, a couple of hours beforehand, the Toulouse fans were already generating quite a noise. Inside the ground, before kick-off, the naming of each Toulouse player upped the decibel levels. Amid a sea of red and black, rhythmic chants of “Tou-lou-sain” mingled with The Fields of Athenry from the 10,000 or so Munster fans in the stadium. Seasoned internationals turned pundits in the press box just nodded and smiled.

Munster were the better team in the first-half, so much so that The Fields and even chants of ‘Allez les rouge’ could be heard during the rare lulls in home drumbeats and roars. But the unrelenting ascendancy of Toulouse in the second period, with one Trevor Brennan in their ranks, could not be denied as the visitors wilted in the heat and increasing decibel levels. A try just had to come and switching Freddy Michalak to scrumhalf from outhalf yielded the match-winning score. The drumbeats and chanting from the home fans reverberated like cracks of thunder around the ground, the crescendo reaching one peak for that decisive try and another for the final whistle.

Although the final margin was 13-12, Munster could not complain about the result on the day and, as ever with such a knowledgeable home crowd, they were as generous in victory as they’d been in defeat by Munster at the same stage three years before in Bordeaux.

Guy Noves, the long-serving and multi-garlanded head coach, paid special tribute to the Munster fans, describing the occasion as a meeting of two nations akin to vintage Toulouse-Perpignan games, then embraced Alan Gaffney and declared: “We beat a great team”.

The main down side to that semi-final was getting home from Aeroport Toulouse-Blagnac, which was even more jam-packed than le Stadium. The Munster charter, due to depart at 9.30pm, eventually took off at 1.25am and landed in Cork at 2.20am.

After Perpignan beat Leinster the next day, Toulouse won an all-French final in Lansdowne Road, but to put Leinster’s stunning, fearless and thrilling win over the rouge-et-noir in the 2006 quarter-finals at le Stadium into perspective, it remains the home side’s only defeat in 11 European knock-out matches. (True, they went out after a 22-all draw in the 1998 semi-finals against Brive, but that was on a countback of tries.)

Leinster would lose in the semi-finals against Munster, but that 41-36 semi-final win, featuring Denis Hickie’s pitch-length try, remains one of their greatest wins and something of a benchmark.

Leinster would return to le Stadium as European champions in 2010 sans Johnny Sexton and lose 26-16 to Toulouse, who went on to lift the trophy for a fourth time by beating Biarritz in another all-French final, this time in Paris.

It is a barometer of their fall since those days that after reaching eight home quarter-finals in a 13-year period, they have never done so since that season. Leinster avenged that loss a year later in the Aviva Stadium, and repeated the trick last season, while Munster have since twice thrashed Toulouse in Thomond Park quarter-finals as well.

Toulouse only hosted four games at the 2007 World Cup, and when France met Namibia in their second game they were in a dark place, having fluffed their opening lines after the opening ceremony when losing to Argentina at the Stade de France.

That said, Ireland were in an even more woebegone spot, having laboured to beat Namibia 32-17 in Stade Chaban-Delmas and then, the night before France hosted the Namibians, barely squeezed past Georgia 14-10. “C’est vraiment grave, docteur,” had run the L’Équipe headline in assessing Ireland’s poor health, and a trek to Toulouse was just what the doctor ordered for an Irish journalist as well as the French team.

After Ireland had withstood a late assault on their line by the Georgians, Monsieur Brennan offered to take me to Toulouse where his family put me up for a couple of nights in order to take in France-Namibia.

As much as this reporter needed a respite from Toulouse, so too did L’Equipe de France from their Marcoussis base, aka “Marcatraz”, and the Stade de France and Paris. Returning to one of their southern heartlands and the bosom of the Pink City, Bernard Laporte had overhauled and reinvigorated his team, cleverly starting eight Toulouse players with another two, Fabien Pelous and Yannick Jauzion, on the bench, in front of their home crowd.

The temperatures were over 30 degrees and a carnival-like atmosphere had been brewing all day long from the World Cup village near le Stadium. As kick-off neared, the ground reverberated to chants of “Allez les Bleus” and a rendition of La Marseillaise the like of which has rarely been heard in Stade de France. French rugby was coming home.

The band played continuously, much like the frequency with which France scored their 13 tries in an 87-10 win, and when Les Bleus ran back a 60-metre penalty attempt from their own line before Sébastien Chabal, then the cult hero of French rugby, steamed onto Michalak’s pass to score from fully 50 metres, the roar was truly spine-tingling.

After the full-time whistle, the crowd demanded the players’ return so as to bid them farewell and bonne chance for the remainder of the tournament.

The downside was that as a result of that restorative win for Les Bleus, you feared for Ireland’s prospects, and so it transpired as they lost to both France and the Pumas. Being the only Irish journalist in Toulouse that night and returning to Bordeaux the next day made it feel more like a 24-hour pass. It was the essence of a French World Cup in France.

This is not to say that le Stadium in Toulouse is my favourite rugby ground in the world but when packed there are few better. The Principality Stadium is always a spine-tingling venue for international matches and big European games which has had a host of memorable Irish days, both good and bad. Nor does it drop with the same sense of history and occasion as Centre Court in Wimbledon or even Roland Garros.

But when Toulouse are hosting knock-out games in le Stadium again, we’ll know they are truly back. And if it comes to pass that the Pink City hosts Les Bleus during the pool stages of the 2023 World Cup, it will be worth being there.

1 Gordon D’Arcy: the next fear for Irish rugby is England in Twickenham
2 David Moyes discovered positive test an hour after arriving at London Stadium
3 Seán Moran: Fallout from Tyrone final celebrations will concern GAA
4 Pro14 teams need private planes to keep show on the road
5 How Dundalk’s opponents Sheriff started on wrong side of the law
Real news has value SUBSCRIBE