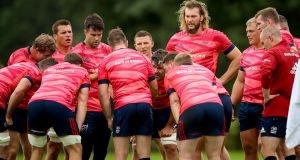 RG Snyman listens in to a Munster team huddle during a training session at UL. Photograph: Inpho

Rudolph Gerhardus Snyman fully intends to help Munster capture a Pro 14 title on September 12th but an instant switch into next season might be interrupted by the Springboks.

The hope is to gather Australia, Argentina and South Africa in New Zealand for a unique Rugby Championship over six weeks starting on November 7th.

Player welfare is about to take a back seat. This tenuous plan to revive Test matches depends on Snyman’s native land coming out of its current state of emergency.

“There is still a lot going on to see if the [Rugby Championship] will go ahead,” said the giant lock from his new Limerick home. “But yes, I am lucky Munster are allowing me to play for the Springboks.”

All of this remains dependent on Covid-19. South Africa remains in strict lockdown, at least until August 15th, as cases tipped over the 500,000 mark with 8,539 deaths announced up to Tuesday.

“The situation in South Africa is a bit worse than over here,” Snyman conceded. “Close family and family friends are doing okay. I can only hope it continues on like that.”

South Africa accounts for over half the reported cases across 54 African countries, the fifth highest in the world, with densely packed townships during these winter months spreading the virus at an alarming rate.

Nienaber, who succeeded Rassie Erasmus as Springboks head coach after the last year’s World Cup, has already cast doubt on participation in the Rugby Championship if Currie Cup games cannot go ahead before the planned kick-off in New Zealand.

“We have a responsibility to ensure that the players have received sufficient conditioning so that they can play rugby,” said Nienaber. “If we can’t play six games, then I don’t think we will go. The player wellbeing risk would just be too great.”

Munster would at least ensure Snyman and De Allende are battle hardened if New Zealand manages to host the southern hemisphere’s major international tournament over a six-week period.

This, however, would see Munster kick-start their 2020/21 European campaign without the two men Johann van Graan insisted on signing if progress is to be made in the Champions Cup.

“The biggest reason I came to Munster was because of coach Johann,” said Snyman of the man he first encountered as a teenager.

Considering South Africa will need to play warm-up games in New Zealand, after they go through a quarantine period, World Rugby has expanded the international window from October 24th – the date Ireland hope to host Italy in Dublin – until early December. The European club season will run concurrently.

Regardless of what transpires in the coming months, Snyman is under no illusions about what is expected of him and De Allende when rugby resumes against Leinster at the Aviva stadium on August 22nd.

“I think our plan will probably be to just take them on head-first from the forwards especially.”

Obviously the six foot nine inch and 120kg lock relishes the confrontational side of the sport but he also possesses an excellent skill set stemming from boyhood days playing flyhalf.

“The biggest influence in that is my dad. Since I was growing up he used to tell me: ‘Never let the ball die, always keep it alive.’

“The rugby in the northern hemisphere is a little more physical so I’m looking forward to that,” he laughs. “In the last couple of weeks, the weather has turned a little bit and it is not as easy to hold on to the ball as it might be in South Africa or Japan. So I will have to adapt a little bit but it should be okay, I can adapt.”

The rugby will be non-stop – besides breaks for travel and quarantine – from now until the British and Irish Lions tour South Africa next summer.

“That’s a big goal for me to achieve and I am very much looking forward to playing against some of my Munster teammates hopefully.”