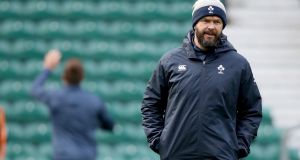 Andy Farrell is relishing the return of the Six Nations later this year. Photograph: Dan Sheridan/Inpho

It’s been so long since last March when the 2020 Six Nations was halted, along with everything else, that you’d almost forget Ireland were still in the mix. But Andy Farrell hasn’t forgotten and maintains Ireland are still very much in the title hunt.

His side currently sit third, and are very much third favourites, after home wins over Scotland and Wales were followed by a loss against England at Twickenham. However they know that two bonus point wins at home to Italy and away to France would secure a fourth Six Nations crown in seven years, while a nine-point haul might suffice as well.

“We’re a team who have our destiny in our hands a little bit even if it is a tough old task,” said Farrell on a zoom call with the Irish media on Thursday.

“We have to perform against Italy first and we need what we need out of that game. I’m sure they will have reflected too and they will be tough first game up. All our lads are aware, I’ve been in contact with them, they know what is coming around the corner, from the inter-pro games to get selected and back into that Six Nations.

“We know it is there to be won and we will be hungry to do that and we won’t be frightened by that. Italy will be tough. And Paris is a hell of a game, isn’t it? It’s in our hands and we want to attack that full steam ahead.”

Farrell also refuted the theory that the break came at a good time as there was a strong belief within the squad that their defeat in Twickenham would prompt a reaction in their final two games. What’s more after beating England, Italy and Wales in Cardiff, France had suffered a loss away to Scotland along with several injuries to key players.

“It actually didn’t; we was gutted. We was gutted that the competition didn’t keep rolling on because obviously after a disappointing game against England, the only thing the boys wanted to do was get back on the horse again.

“We had had a great reflection week and we was brimming to go over to Paris and see what we could so, so we was gutted. We trained on the Tuesday morning and got told at lunchtime that the game was going to be off, so it was a whole lot of disappointment really.”

“We didn’t know what was going to happen at the time and here we are, still not played, so we was a little bit disappointed. But having said that, to be able to reflect on the short campaign and know what’s in front of us has been good time to use.”

The lockdown obliged the squad to indulge in some navel contemplation according to the head coach.

“Like anyone in this time that’s been stalled through work, etc. Reflection has been the main topic. What I’ve really enjoyed is you normally get to feedback to each other on a weekly basis in rugby but you don’t get to reflect on the reflections. We certainly have had plenty of time to do that. We’re brimming to get those ideas and implement them as soon as possible.”

I certainly take it seriously, any competition that you’re involved in, you want to win it

Lest we also forget, this remains Farrell’s first Six Nations campaign, albeit an extended one which will lead, after just one week’s break, into the proposed new eight-team tournament featuring the Six Nations countries plus two others, almost certainly Japan and Fiji.

“A new competition, two new teams in the competition, a different format for everyone. It’s what everyone wants to see, a competition that’s going to be World Cup-like in a way. Along with the two games we’ve got left in the Six Nations, it could be that we’re together for eight or nine weeks, which is great for us moving forward.”

While Farrell also has desires to win the new one-off tournament, he intimated that no less than the provinces, Ireland may have to be flexible in their selection thinking.

“I certainly take it seriously, any competition that you’re involved in, you want to win it. We would certainly never shy away from that. What the tournament would bring you before we get into the autumn series, is that you would probably tend to utilise a squad that would be a little bit bigger than normal simply because of the run of games in back-to-back weeks, which is World Cup-esque. Like all things, we’ll roll with the punches and see where it takes us.”

The first of the rearranged Six Nations games against Italy comes a week after the final of the Heineken Champions Cup. Leinster host Saracens in a reprise of last year’s final while Ulster are away to Toulouse in the quarter-finals and Farrell sounded optimistic about the chances of James Ryan being fit for the latter stages in Europe should Leinster progress, after a procedure on a shoulder injury picked up in training.

“Well he’s certainly a great player, one who has come on with massive strides over the last few years. He’d be a loss to any team, internationally as well.

“He was one of those players who used the Covid lockdown time to its maximum. He came back in great shape and it was unfortunate with his injury to have a little bit of a setback but knowing James he will use this time wisely to better himself as a rugby player and as a person.

“It looks like, with the time frames in front of us, that he could be back for the internationals and hopefully a few big games for Leinster before that. We’ll see how he gets on with his rehab and let him get on with it.”

He's been a great tonic for Irish rugby

The November matches are given added intrigue by the likely presence of James Lowe, who qualifies through residency early in that month.

“He’s been great,” said Farrell enthusiastically. “He’s been a great tonic for Irish rugby really and he’s played some outstanding rugby over the years. Like everyone else, we’ll see how he comes back and how he performs in the early parts of the season and there are plenty of big games in which he can put up his hand. He is the same position as everyone else. He is available from the beginning of November and we need to make sure we get selection correct accordingly and he will be part of our plans in the same way as everyone else is.

“He’s a big guy, he's strong, he loves getting on the ball as much as he can, he comes off his wing, he is hungry for the ball, he doesn’t like getting tackled that much, he has a great left boot and he is good in the air as well.

“He’s a great all-round player I’m sure he can see pats of his game where there is room for improvement as well. Hopefully we can see him in top form so he can push his claims for selection.”