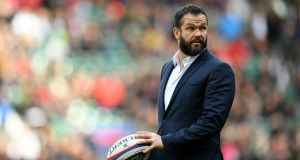 Success breeds success, it is said, but come October it could also create issues for Ireland which none of the other international teams will be obliged to consider. Were any of Leinster’s or Ulster’s players in line to play Italy on October 24th to reach the Champions Cup final the week beforehand, Andy Farrell has strongly intimated they will be rested for the first of those rearranged Six Nations games.

That game at the Aviva Stadium will be Ireland’s first of six Tests in a seven-week period, to be followed by the Six Nations finale away to France a week later. There is then a week’s respite, after which Ireland are also set to face Wales (home), England (away), Fiji (home) and one from France, Scotland, Italy or Japan in their final playoff game (also expected to be at the Aviva Stadium) in the proposed, one-off eight-team tournament.

Looking at the likely prospect of Ireland having to expand their squad in this uniquely demanding autumnal schedule, the Irish head coach admitted: “I think it could be forced upon us anyway from the start regarding the European final is the week before we get stuck into Italy week.

“We would want to try and come together a little bit before that anyway. It is going to be a completely different kettle of fish for ourselves; it could be from the off if Ulster and Leinster get into that final and win that final.

“We could be picking from two provincial teams or maybe three or, unfortunately, we might be able to pick from four,” he added, were neither province to reach the final.

The schedule, injuries, the risks of failed Covid-19 tests which might mean carrying additional players will all combine to ensure that “we’ve got to be adaptable from the start”.

Conceivably Leinster and Ulster could have up to five knockout matches in the Pro14 and Champions Cup in a seven-week period immediately before the Italian game. On the prospect of the provinces having to rotate in these games, Farrell was less specific, but clearly this will be considered as well.

“We’ve got fantastic relationships with the provincial coaches and at the forefront of that is player welfare. We’ll do what’s right for the players. What goes along with that is we all want the players to play in the games, to perform in those big games.”

Injuries, he admitted, were likelier soon into the resumption after the five-month hiatus.

“It’s a hell of a year isn’t it which finishes in what I’d imagine is everyone’s dream,” Farrell said in reference to the proposed Lions tour to South Africa and looking at all the home countries, he added: “I’m sure we’re going to see a few bolters.”

While optimistic that James Ryan will be fully fit for Ireland’s international programme, Farrell’s options could also be enhanced by the return from injury of Tadhg Beirne, Joey Carbery and Dan Leavy along with Ian Madigan’s arrival in Ulster from his French/English sojourn, as well as the availability come early November of James Lowe.

That said, Farrell encouraged patience over Leavy after his recovery from the horrific knee injury he suffered in March last year.

“I think for us all really, if he can get back to any type of form any time soon, I think that will be superb for everyone, going forward. But for Dan Leavy to get back to his Grand Slam, Twickenham best, I suppose we need to give him a little bit of time.”

Reflecting on the last four and a half months, Farrell said: “I could talk about it for hours really. l’ve certainly enjoyed the time. It was hectic.”

Much of it was a time for what he described as “the reflection on the reflection” as well as “talking to numerous different outfits in business and in sport”. But he is itching to get going again.

The start to his tenure having been interrupted three games in, looking ahead he said: “Attack is always going to be a work in progress for everyone really; making sure that we understand, first and foremost, that it’s not about passing the ball for passing the ball’s sake.”

“Of course, we want to play heads-up rugby and we want to see and play to space, whether that’s in front of us or to the side of us, but at the same time the game’s still the game. It’s still about go-forward, it’s about quick ball and imposing yourself on the opposition. So getting that blend is going to be key for us as well.”

“We’ve seen with the New Zealand competition that if your set piece is not up to standard then your whole all-round game deteriorates around that. We’ve got a great set piece. We’re technically as good as anyone that I’ve seen. The intent in both of those areas is going to be key for us.”