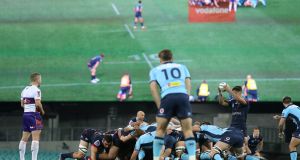 Last weekend I watched my first game of live rugby in many months.

The Waratahs played the Melbourne Rebels at the Sydney Cricket Ground.

In the match, there were 14 scrums, 28 lineouts and 26 penalties. The combined stoppages of play for set plays and penalties was 68. That amounted to approximately 28 minutes of scrums. The six penalty shots and three conversions added up to just over 10 minutes of goal kicking. There was not much time left for actual rugby. Sadly, I have seen this scenario repeated many times in recent seasons.

Much of the rugby that has been oozing out in recent years has been horrible and change is urgently required.

Here I will simply describe to you what happened at a single scrum as a case study into what is happening at almost every scrum across the globe.

When referee Angus Gardner blew his whistle for a Waratah knock-on, at the 34 minute mark of the first half, it took the Rebels hooker, Jordan Uelese, 50 seconds before he put his foot on the mark to commence the overly complicated, time wasting, bag of manure that the current scrum coaches and players have conjured up as binding before packing a scrum.

Here I am compelled to ask who gave this generation permission to stop the game for almost a minute at every scrum? The scandalous time wasting that this generation of players and coaches have been allowed to get away with, combined with their horrid negative scrum tactics, aided by clueless officiating, means scrums are completely out of control.

To put this into context we should remember that the match-winning try in that classic Rugby World Cup quarter-final match between Ireland and Australia at Lansdowne Road in 1991, was scored from a scrum by Michael Lynagh.

From the time referee Jim Fleming blew his whistle for the formation of the scrum to Lynagh scoring his try only 28 seconds passed.

The Rebels hooker took almost double that time to place his toe on the mark to start the process.

Across the ditch, in Super Rugby Aoetrea, the standard of play is significantly higher,

At one minute and 23 seconds, referee Gardiner blew his whistle and ordered the packs to reset the scrum. After yet more standing about and time wasting the piano pushers (the forwards), acting like five-year-olds building a clunky Lego truck, repeated the brick-by-brick, boring as bat shit process that had just lead to the previous scrum collapse.

All this time the piano players (the backs), are forced to stand idly by.

After two minutes and 26 seconds, the ball was still in that scrum. Referee Gardner then flung his arm out for a penalty advantage to the Rebels for a scrum infringement, even though the Rebels tight head prop, Pone Fa’amausili, was laying flat on his face on the hallowed grass of the SCG, detached from the scrum.

The only positive my companion and I discovered was that when the referee signals for a scrum, you can leave your seat, walk to the bar, bump into an old mate, have a quick chat, buy an overpriced, foul-tasting brew, then return to your seat content in the knowledge that the ball has not yet come out of the scrum.

You get ripped off twice. Once for the overpriced drink and secondly because you paid to watch a game of rugby but the players refuse to play.

Across the ditch, in Super Rugby Aoetrea, the standard of play is significantly higher, yet there is the same excessive time wasting and endless whistleblowing of enforcing rugby’s overly complex laws. This all produces far too many shots at penalty goals, scrums and mauled lineouts. These prolonged stoppages blight the Kiwis’ wonderful skills.

While the Kiwis’ scrum organisation is as horridly slow as the rest of the planet, a feature of the Hurricanes’ superb away win over the Crusaders last weekend was that their scrum delivered a lightning fastball to Ardie Savea at number 8, who immediately delivered this beautiful possession to his talented, attack minded backs.

Congratulations must go to the Hurricanes coach, Ireland’s own Jason “Dutchy” Holland, who showed the world that coaching with an attacking mindset demands that the piano pushers give the piano players the opportunity to perform.

Rugby must have fewer penalties, fewer kicks at goal, less stoppages, shorter scrums, no time wasting and more running rugby with the ball in hand.

If we want more tries, reward the points for scoring tries by lifting their value to seven points. To discourage the endless time wasted from shots at goal, reduce the value of penalties down to two points. Drop goals must be reduced to one point to make them almost an irrelevance.

A points scoring system that rewards the entertaining and discourages time wasting and endless shots at penalties is imperative.

The current stewards of rugby – that is the coaches, players, referees and legislators – should remember that they do not own the game. Their task is to nurture the game and pass it onto future generations in a better shape than they found it. Today under their stewardship, on their shift, the endless stoppages and negativity their leadership is producing is failing us all.