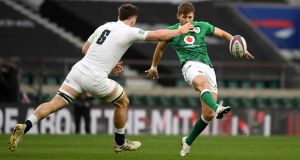 A mixed bag, some very good aerial work but miscalculated the flight for England’s first try, got caught underneath the dropping ball and conceded two penalties, albeit that he lacked ruck support. Rating: 5.

Good feet for Ireland’s only try-scoring chance in the first half, spilled a couple of balls but was one of the few Irish players to use footwork to try and evade tackles. Rating: 6

Some of his clearing out wasn’t strong enough, orthodox running lines, and missed a tackle on Jonny May for England’s first try. He was better in the second half but should have finished his try chance. Rating: 4½

One of the few Irish players to consistently get over the gainline, despite taking the ball very deep, but they were largely solo-runs and there was no midfield creativity from a collective perspective. Rating: 4½

Looked to get involved but was limited to taking static ball and trying to bullock his way through multiple defenders. Kicking game finished on the positive side of the ledger. Rating: 5.

Too deep, he needed to play flatter, challenge the defence, not shovel out ball and be more precise and varied in his kicking, one grubber aside. In fairness the ball he got was slow but he needed to do more. Rating: 3½

A mixed bag in terms of his kicking and some of his decision making but did look to try and involve those around him. Unfortunately there weren’t too many volunteers and the ball he got was slow. Rating: 4

Missed one or two clearouts at the breakdown, worked hard on both sides of the ball – eight carries, three tackles – and was part of an Irish scrum that was solid. Rating: 5.

Three throws went astray in the opening 30 minutes, all to the back of the lineout, which questions the calling as well as the throwing; the lineout collectively was a shambles. He carried effectively and tackled too but it was a tough day in terms of primary duties. Rating: 3½

A phenomenal physical effort from the Leinster prop, who worked prodigiously to try and get Ireland over the gainline for the entire match often taking on two and three tacklers; scrum good too. Rating: 6½

Like the rest of his team-mates there was no faulting the application but appeared to pick up an injury early on and that impacted on his contribution before being replaced. Rating: 4.

Not the day or game he wanted as Ireland captain for the first time; it may have been a distraction. Conceded four penalties, and was Ireland’s lineout caller so he’ll feel very disappointed on a personal level despite his typically prodigious work-rate. Rating: 3½

Most unusually the game passed him by as he didn’t feature much in terms of his strength and his ball carrying. The Ireland backrow were played off the pitch by their English counterparts. Rating: 4

He gave everything physically and made some metres in unpromising situations but Ireland were well beaten at the breakdown and the balance in the backrow is not right. Rating: 5½

Voracious in the volume of his carries and possesses the best footwork of anyone in the Irish pack. He did remarkably well at times to eke out a metre here and there despite generally being swamped. Rating: 6.

Billy Burns and Jacob Stockdale produced the one moment where imagination and execution combined from an attacking perspective and it led to a try. Rob Herring, Will Connors and Finlay Bealham added energy, so too Conor Murray and Iain Henderson without having the wherewithal to change the outcome. Rating: 6

Andy Farrell saw his team comprehensively dominate possession and territory but Ireland were creatively bereft for the most part; linear and predictable, hamstrung by slow ball. The lineout, maul, breakdown, clearing out, protection of ball and speed of same, passing, orientation of the back play, wasn’t good enough to discommode the beaten World Cup finalists. You either learn from history or repeat it and at the moment it’s the latter for Ireland when it comes to physically powerful teams. Rating: 4½