John Mitchell bringing a bit of theatre to England’s preparations 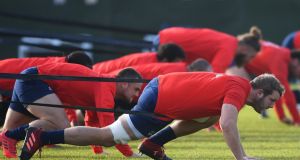 England’s Joe Launchbury and his England teammates are straining at the leash. Photograph: Alex Davidson/Getty Images

Georgia England should beat Georgia comfortably in their Autumn Nations opener at Twickenham on Saturday but for a number of reasons the squad’s levels of motivation are unusually high. From fringe players desperate to start to coaches using innovative ways to lift the squad’s emotional energy, it is clear the Six Nations champions are not about to rest on their laurels.

Exhibit A is the entertaining video clip that has emerged from the England camp of the defence coach John Mitchell, dressed in an Italian jersey, actively encouraging players to flatten him in preparation for the final weekend of the Six Nations. The same Mitchell has also admitted to urging players to draw inspiration from African wild dogs, among the world’s most effective predators. The former All Blacks head coach has not, as yet, brought any into the dressing room but, as with the Italy stunt, there is method behind the apparent madness.

“To create a bit of theatre around the message - and create a bit of fun - is important,” said Mitchell. “It is one thing dressing up - but prior to that there were questions around how Italy carried and their running lines. And then there was the funny bit at the end.

“These days you are very conscious of presenting to this generation in a lot of different mediums. It’s about being effective with your message each week.”

So has he utilised any wildlife, alive or dead, this week? “No, no. What I have used previously is a fantastic animal - the African wild dog - as a theme. A lot of teams are very good at theming around the characteristics of an animal or a person (but) I haven’t been involved with bringing in any animals, as such.”

Instead England have been reintroduced to their new skills coach, Jason Ryles, who has just helped Melbourne Storm win the NRL title in Australia. Initially he will be focussing on sharpening England’s attack while Jones has given the pot another deliberate stir by inviting the Gloucester wing Ollie Thorley to train with the forwards and talking up the Bristol flanker Ben Earl as a potential backline option.

Both should feature in England’s 23 for this fixture, while Elliot Daly is running again following the leg injury which ruled him out of the Italy game. - Guardian