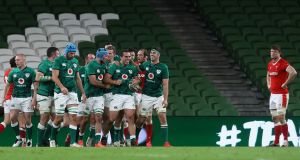 The All Blacks are hardly pining for James Lowe like the Irish were watching Jack Grealish at Wembley, but the benefit to their respective nations of choice can prove equally profitable (spiritually speaking, not financially).

On a night for granny rules and residency players, all the men not born on the island shone. Quinn Roux had a whale of a game, muscling over for a try and injecting a power surge that was expected of him when recruited from South Africa eight long years ago.

But Lowe’s long black mane kept us enthralled. Every time it needed plaiting we scribbled down his latest impact. The mop flowed loose for the anthems - we suspect he was mumbling Ireland’s Call during Amhrán na bhFiann - before knotting up the gruaige into a little bun and getting down to business.

It took 19 seconds to drop his heft on poor Leigh Halfpenny. Not a minute was clocked when Lowe took a ball overhead before crawling six metres under crumbling Welsh bodies. Such enthusiasm backfired as he was isolated and dispossessed.

Not to be outdone by Peter O’Mahony picking a fight with Alun Wyn Jones - they have previous - the smiling Kiwi took umbrage with Liam Williams (they also have previous from the Lions tour) thumbing him after the whistle. Lowe clearly enjoyed the thick forearm being wrapped around his mug.

“That’s the last one,” Mathieu Raynal warned Wyn Jones and a soon to be hamstrung Johnny Sexton when the row petered out.

Without the crowd baying for blood a few scuffles should be mandatory during this already off-kilter Nations Cup.

Lowe has brought an electricity to Leinster’s attack since avoiding the long queue for the 11 jersey in New Zealand. There is no middle of the road performances with this 28-year-old. He had already blown a try after five minutes when dropping Sexton’s pass.

Not to worry, Andrew Porter was making mince meat out of Rhys Carre and the Welsh scrum so the opportunities to dance off his wing would keep coming.

There is a bit of that Grealish pizzazz to how Lowe plays. Same socks midway down bulging calves. Same ability to drift all over the heat map. The difference is Lowe’s ability to bulldoze over an opponent, as Williams learned.

What makes Lowe so special, though, is his ability to offload while being held. Gibson-Park - who came through the same NZ Schools side - unleashed his buddy in the 20th minute with an old Ireland move slightly revamped. The blindside winger ran hard and, with Sexton as a decoy, Gibson-Park picked Lowe out before a neat pass had Sexton almost in the clear.

Everything was running smoothly besides Raynal’s ridiculous decision to penalise Porter despite his vice grip on Carre. Billy Burns - with his English heart and Irish blood - opened his international ledger as the Welsh loosehead screamed ‘No Mas’ before the interval.

Like any opponent of Ireland since 2009, the sight of a Sexton-less team gave Wales a renewed belief that a 10 point deficit was surmountable. It wasn’t. The visitors are on a six game losing streak in the post Gatland era.

The second half had nothing much to do with wingers but Lowe is a natural born finisher and he waited until clock turned red to run a trail line off Doris. The Welsh defence saw him coming but could not deny him a try on debut.

“Nice ‘meat pie’ at the end,” said the boy from Tasman Bay. “I just thought of my family, my friends, all the people who wished me well. It’s quite emotional, eh?

“I am absolutely stoked. But family, that’s what I was thinking about when I put that ball down.”

Fancy a little cut off England at Twickenham next week James?

“Oh don’t get me started, that’s another beast.”