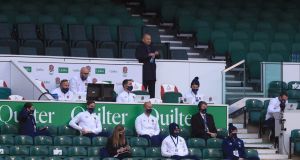 Eddie Jones and his coaching staff look on during England’s win over Ireland. Photograph: Adam Davy/PA

The gap is widening between England and Ireland on the field but, far more worryingly, in terms of the expertise off it.

Eddie Jones boasts assistant coaches that previously served as the All Blacks head coach, the Springboks forwards coach and the most recent acquisition from the NRL champions Melbourne Storm. The technical aspects of their game are only going to improve.

But Jones continues to pay Ireland a level off respect that his players have stopped showing their counterparts.

“I am never disappointed when we beat Ireland,” the 60-year-old snapped back at a question about England’s attacking display in the second-half.

Not that the English players were overly disrespectful during this 18-7 victory at Twickenham, but Maro Itoje and company were so obviously the physically dominant side, once again.

The man handling of this new Irish pack is difficult to measure while the lineut - supposed to be controlled by St Michael’s duo Ronán Kelleher and James Ryan - continues to malfunction.

“The penalties we gave up in the second-half showed that we have a lot more in us.”

Coaching is a major reason why the gap between England and Ireland is currently so pronounced. While not yet a chasm, it will be soon enough. The ability to head hunt Matt Proudfoot, the man who had plenty to do with the overpowering of England in last year’s World Cup final, prompted Ireland coach Andy Farrell to keep offering the ‘ we are a work-in-progress’ narrative after this latest defeat.

That line will lose value come the Six Nations if the losing streak to England gets stretched to five games.

“[Proudfoot] is adding a lot, mate,” said Jones of the former Scotland prop. “He is doing a great job for us.

“It was great timing for Jason Ryles to come in,” added Jones of the recent addition from Australia Rugby League. “The food bill has gone up but he has added considerably to our coaching prowess. Him and Simon [Amor, the Sevens expert] are starting to work on the more foundational part of our attack and we will see growth in that over the next 12 months.”

The coach of the week in England camp has to be the one season All Blacks coach turned defensive guru, John Mitchell.

“It felt like an 80 minute defensive session for England,” noted Stephen Ferris on RTÉ.

Jones riled against the idea that England lacked an attacking edge in the second-half as they seemed happy to tackle away until every player hit double figures when it came to felling predictable Irish runners.

“I know how hard it is to beat Ireland. We have been beaten by them and it is not a good feeling.”

It sounds like Jones and England will never forgive that Grand Slam victory at Twickenham in 2018.