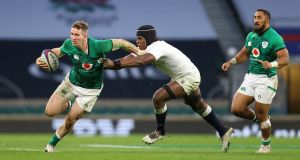 Ronán Kelleher has previously flagged his struggles with hitting the jumper at international level. An ultra-physical hooker, Kelleher is the best option Ireland have at the moment around the park. He is far superior to Ulster’s South African Rob Herring but none of that matters if your throwing is so poor that the team must adjust to the glaring weakness - in the one area you are supposed to excel - with that panicky lineout to the front on 38 minutes ending up with Jamison Gibson-Park being mauled by Sam Underhill on the Irish try line.

However, this is a shared disaster. James Ryan is not yet equipped to run the lineout for Leinster never mind at Twickenham. He has not had enough time in the role.

But that is not the issue. The coaches - Simon Easterby and John Fogarty (we are not sure who is running the set piece as Easterby was switched to defensive coach when Andy Farrell took the top job) - are responsible for putting the right players on the field. Quinn Roux was rewarded for his performance against a Welsh side in turmoil despite Iain Henderson’s return from an unexplained medical condition. We are not calling for Devin Toner’s third coming - that ship has sailed - but Henderson was initially charged with putting big Dev out to pasture three years ago.

The Ulster captain sat on the bench as the Ireland lineout collapsed in upon itself in the opening 40 minutes. All to ensure Roux kept the scrum solid (nowhere near dominant, just solid).

At the moment the coaches are robbing Peter to pay Paul. This is an old Irish trait reborn. At what point does the focus turn to them, especially Joe Schmidt’s former assistants?

“Ireland are the strongest poaching team in the world,” said Eddie Jones with a serious face last Thursday. The old teacher knew precisely what he was doing with that comment. He was dying to use it (the question was about something else entirely).

We didn’t really learn much from Tom Curry, Billy Vunipola and particularly Sam Underhill devouring Irish ball carriers for lunch. But it was more pronounced than last February’s lesson in how to punish isolated runners.

On 29 minutes Hugo Keenan tried to reward Keith Earls’ shifty break only to be swallowed by Vunipola. On 32 minutes Curry took away Jamison Gibson-Park’s sweets. Cleanest of all was Underhill ripping the ball off Earls just before half-time.

The “United Nations” is a structural flaw in the Irish system

Quinn Roux and Jamison Gibson-Park were whipped off on 50 minutes. Neither were up to the task at hand (Kelleher walked with them as Rob Herring kept up the South African quota in Team Of Ireland).

CJ Stander was anonymous, James Lowe unable to make any sort of headway.

The UN joke - which Jones found hilarious - about Ireland having eight players in the matchday squad that qualify via residency or an Irish granny must be highlighted, and not because it is an indictment of the rugby laws but because the eight players, as a collective, are way off the standard.

Of course Bundee Aki and Stander are above average internationals. This is established but, on at Twickenham, Stander was invisible in the face of the second best backrow trio in the world - his native Springboks being the best.

The lean on foreign imports is down to the IRFU’s failure to “fast track” players into the professional ranks. Six years ago they ignited a system that was supposed to ensure the relief props are not a million miles off the starters. Cian Healy and Andrew Porter were under hellish pressure in every scrum.

We know the fast track policy has stalled because Farrell believes the best team is not all the 20 somethings the IRFU published in last week’s match programme.

“Six years ago the IRFU and the provinces began the process of reframing the elite player pathway with the aim of fast tracking talent into the senior professional ranks,” said the union only last week.

There followed a very long list of mostly Irish born talent - including Munster tightheads Kenyon Knox (21) from South Africa and Roman Salanoa (23) from Hawaii - aged between 21 and 23 that can almost exclusively be found playing Pro 14 rugby.

That’s the problem. The six-year plan has yet to bridge the gap in specialist positions. That’s why England just wiped Ireland out for a fourth game in succession.

These players will eventually be ready. Some of them - like Ryan Baird, Harry Byrne and Craig Casey - could be capped against Georgia next Saturday.

The system looks good on paper. It really does. Now it needs to be translated to the pitch. Fast tracking is no longer the last resort.

Johnny Sexton’s performance as the H2O runner was sufficient enough to put him back into the 10 jersey as soon as the hamstring clears up.

Ross Byrne has a polished right toe - this has long been established - and is worth every penny Leinster pay him, but you wonder how long he will be able to fend off Harry Byrne and Ciarán Frawley at club level.

An international flyhalf must be able to thrive on the gainline. Perilously close to belts of England backrowers is where Byrne needed to exist if the power of Aki and Chris Farrell was to be unleashed. That was Ireland’s only true weapon but it was never used because Byrne is not the answer.

Again - back to the long list - there is a queue of outhalves that need to be exposed as soon as possible.

Billy Burns, who is definitely not the answer in a post Sexton era (which may never actually come), closed down the show with a pretty chip for Jacob Stockdale’s try. It took 74 minutes to avoided being nilled.

Harry Byrne, no Ben Healy, no Jack Crowley is the chosen one. One of them will eventually glide through but the next two years could prove groundhog day every time Ireland come up against England, France, South Africa and New Zealand, unless the pack is strengthened.

England can easily beat Ireland performing at about 70 per cent

“It felt like an 80 minute defensive session for England,” said Stephen Ferris on RTÉ. “We talk about Ireland evolving, but surely England need to evolve if they are to win a World Cup.”

Maro Itoje is so obviously the best player on the planet but, again, this result is as much a coaching issue as it is a player problem. Lots of technical work to be done by Farrell’s backroom. The focus can only turn on what they are doing if the performances do not improve.