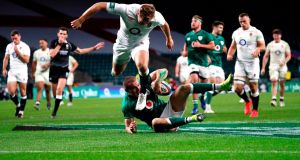 There wasn’t much for Ireland to take from a fourth successive defeat against England except maybe a collective headache as they battered away at a largely impenetrable white wall at Twickenham.

The tackle count of 232 to 63 tells it all, for remarkably it was England who made four times as many and, what’s more, only missed nine compared to 11 by Ireland.

The abiding memory of the match will be of willing Irish carriers running headlong into that white wall of tacklers, who then bounced to their feet and rejoined the defensive line, or chose their moments to contest for the ball.

Of the forwards, only Caelan Doris looked capable of getting over the gainline and without a genuine openside Ireland were beaten comprehensively on the ground.

England applied pressure everywhere, as they were always likely to, and the Irish lineout struggled badly. Ross Byrne played deep and there was little creativity from the 10-12-13 axis, with Ireland recycling slow ball in the wrong areas of the pitch.

Another major work-on is better manning of the rucks, but of some consolation was the way Ireland kept trying and, after the bench made some impact, were at least rewarded with a try. Drawing a blank would have been seriously demoralising, although there was a clear lesson in the need, and the reward, for an inventive kicking game.

Ireland trailed 12-0 at half-time, and somehow if felt like that could have better, but by the same token it could have been worse. To begin with, after both sides had felt each other out, Owen Farrell exploded onto a quick tap by Ben Youngs but CJ Stander saved a likely try by preventing the pass reaching Jamie George. Against that, the first of three lineouts inside the English 22 floundered when Rónan Kelleher overthrew to James Ryan.

England were, as expected, quicker to put boot to ball, even in the opposition half, although Jamison Gibson-Park and Byrne also looked for grass in behind too.

The first quarter pivoted on England’s scrum loading the pressure onto the tighthead side and, a little dubiously, Pascal Gaüzère awarded the apparently ‘dominant’ scrum by penalising Andrew Porter. The camera panned in on Eddie Jones, who had highlighted Porter’s scrummaging and Gaüzère’s refereeing at scrum time, and he resisted a smile.

England went to the corner twice in succession and although Ireland held up the drive, England’s one-off runners narrowed the green defence, leaving Hugo Keenan isolated by the left-hand corner flag against Jonny May, who is exceptionally good in the air. The Irish fullback slightly misread the flight of the ball and mistimed Farrell’s cross-kick, as May gathered cleanly to score, but the odds always favoured the latter.

Within four minutes the prolific winger added his 31st Test try. Again, an attacking Irish throw went awry when Kelleher overthrew and Byrne couldn’t reclaim the ball on the deck. Instead, Maro Itoje, Ollie Lawrence and Henry Slade moved the ball on to May, and he stood up and stepped Farrell to break clear and chip ahead. The kick was a little too infield but only Gibson-Park, and the recovering Peter O’Mahony had read the danger and worked back. May kept in front of Gibson-Park, deftly nudged the ball and gathered to complete an 80-metre try.

Ireland’s preference for recycling possession saw them work their way through 17 phases, mostly for little reward except when moving the ball wide to James Lowe and then, via Keith Earls’s floated pass, to Bundee Aki.

When Gibson-Park sniped, stepped and offloaded to Earls, he sidestepped Elliot Daly and fended Youngs only to be denied a try when May tackled him three metres short of the line.

Off the recycle, Keenan was first receiver and Billy Vunipola earned a relieving player when adjudged the first man rather than a tackler. Gaüzère soon penalized a bemused Gibson-Park for what seemed the exact same.

Sam Underhill claimed a try when tackling an isolated Gibson-Park off a curious exit ploy but on review was shown to have not rolled away when playing the ball illegally, so Ireland skipped off both regretful and relieved.

Without doing much in the third quarter, England extended their lead to 18-0 through two Farrell penalties, the first against Quinn Roux for scragging Joe Launchbury around the collar and the second when James Ryan went off his feet.

Things looked ominous when England upped the tempo but Doris, who had another fine game, won a relieving turnover penalty and followed it up with another turnover. Thereafter, the final quarter seemed almost exclusively to be played in the English 22 as Ireland hammered away at an impenetrable white wall.

Tellingly, the closest Ireland came to scoring was when abandoning the running game and taking a leaf out of England’s attacking manual when Byrne used an advantage with a grubber in behind and Farrell gathered but was brilliantly tackled and held up over the line by Slade.

Ireland continued to huff and puff, and England just kept knocking them back, the ubiquitous Itoje leading the charge and the vocal celebrations when another lineout malfunction led to Tom Curry winning a turnover penalty.

The more the game stayed out of Ireland’s reach and the more they kept knocking at the door the more important it became imperative Ireland didn’t come away pointless.

Jacob Stockdale added a real threat off the bench and after another multi-phase attack Billy Burns chipped over the England defence for Stockdale to gather on the full and beat the covering Dan Robson.

It was slim reward for so much effort, but it was something.