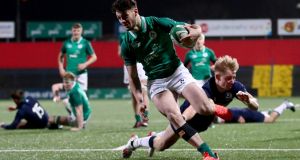 Ireland’s Andrew Smith goes past Roan Frostwick of Scotland to score a try in the opening round of the Under-20 Six Nations Championship. Photograph: James Crombie/Inpho

Andrew Smith has compiled an impressive try scoring highlights reel to date - from his acrobatic finish for the Ireland Under-19 team against Australia Schools in December 2018 to a slightly more sedate finish on his debut last Friday night for the Irish 20s in their Six Nations win over Scotland. He also demonstrated his agility in dotting down for Leinster A against Munster A in the Celtic Cup this season.

A Leinster Schools Senior Cup winner with St Michael’s College last year, the 19-year-old accepted an invitation from Clontarf coach Andy Wood – the New Zealander had coached him at provincial underage level – to make the relatively short trip from his Sandymount home to Castle Avenue.

He explained: “I’ve played about three games. I’ve been coached by Andy at Leinster 19s and he texted me over the summer. I’m just delighted to get in with Clontarf with a coach I knew.” Smith can play right across the three quarter line as he has demonstrated at school, where he has played outside centre, wing and fullback.

His preference is centre as “you get your hands on the ball a bit more,” but he’s more than content on the wing for the Irish 20s. He started playing rugby in first class in Michael’s and with his local club Bective Rangers and then Old Belvedere but he also played Gaelic football with the Clanna Gael Fontenoy club in Ringsend.

Indeed there is something of a GAA pedigree on his mother, Clodagh’s side of the family in a grand uncle, the former Galway All Star footballer and Mayo manager, Liam O’Neill and his son Kevin, who also won an All Star while playing for Mayo.

Smith said: “I started rugby quite young at Bective and Michael’s. I have some really good memories playing all the way through junior school. I played with Mark [Hernan, who is also on the Irish 20s] since third class. During the summers I played quite a good bit of Gaelic football with Clanna Gael. I picked up a few skills from that which kind of helped as well.”

Rugby took a more central part in his sporting life in secondary school, making the JCT in third year and spending two years on the SCT, while also playing representative rugby with Leinster and Ireland. Three tries for the Ireland Under-20s in a warm-up game against a Munster development team copper fastened his place on the 20s for the Scottish match.

He was grateful for his exposure to elite club rugby as it allowed him to “get used to the physicality of players that are much bigger than you, so it’s not a complete shock when you go into the 20s. From my perspective, (the Scotland game) it was quite a quiet game. But obviously the physicality, the tempo, it’s really high. You kind of enjoy that I suppose and enjoy playing behind such a good pack. They’re really good. When they play like that, it’s just a joy.

Ireland host Wales at Musgrave Park on Friday night but according to Smith they will prioritise improving their own game. “We’ll have a look at them this week, just kind of touch on them, but the focus is definitely on ourselves.”