Who is Max Deegan? Opportunity knocks for rare talent 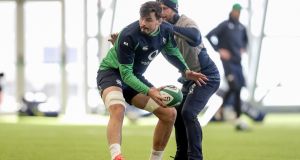 Max Deegan and Jordan Larmour once formed a centre partnership for the Wanderers’ Under-12 minis, were reunited after school in the colours of Leinster and on Saturday at the Aviva stadium are likely to share pitch time at senior test level.

Deegan (23) is set to win a first cap after being named in the replacements for Ireland’s Six Nations Championship match against Wales. Although eight months younger, Larmour (22) has already made 22 appearances for Ireland, scoring six tries.

It’s fair to surmise that the two players would have been something of a handful to contain back in their Wanderers’ days. It is a useful reference point to understand Deegan as a player these days. Two of his core qualities are his speed and athleticism. It wasn’t until his frame stretched and filled out a tad that he swapped the backline for the pack towards the end of first year in St Michael’s College.

His father Aidan, a former president of Wanderers, was a flanker, while his uncle, Brendan captained the club and also played for Connacht at hooker. Max’s grandfather, Brendan Snr, a hooker too, also represented the western province.

The Deegan family were from Athlone and Aidan captained the Marist College to their first ever Connacht Schools Senior Cup victory in 1977. Coincidentally the second person to captain the school to SCT provincial success (2012) is Max’s erstwhile Leinster team-mate, Robbie Henshaw. His mother, Suzanne Deegan, is a well known landscape artist.

Max Deegan won a Junior Cup medal in Michael’s but an SCT win eluded him although he did play in the same Ireland Schools team as the captain, James Ryan, Andrew Porter, Jacob Stockdale, Will Connors and Larmour.

He was the number eight on a Ryan led, Nigel Carolan coached, Ireland team that lost to England in the 2016 Under-20 World Championship final at the AJ Bell stadium in Manchester.

Deegan, who won two man of the match awards in the tournament and scored memorable tries in wins of New Zealand and Argentina, was voted Under-20 World Player of the Year beating a shortlist that included Japan’s Ataata Moeakiola, Harry Mallinder (England), Shaun Stevenson (New Zealand) and Curwin Bosch (South Africa).

Deegan is a superb athlete, quick, he runs good lines, possesses great hands, offers a lineout presence and can play right across all three backrow positions

He played for Mike Ruddock’s Lansdowne in the All Ireland League Division 1A while still a teenager before making his Leinster debut in a five minute cameo off the bench against the Dragons in December 2016 - one of three appearances that season. He has won 60 caps for Leinster with an impressive strike-rate of 18 tries.

Deegan started three of Leinster’s Champions Cup pool matches this season and has scored five tries in his last four games, winning two man-of-the-match awards to boot. His tussle with Caelan Doris, in the absence of the injured Jack Conan, has driven both players to excel.

Andy Farrell’s decision to call-up Deegan to the national squad for the Six Nations and promote him to the bench for the Wales game, following an injury to the unfortunate Doris, is thoroughly justified. Deegan is a superb athlete, quick, he runs good lines, possesses great hands, offers a lineout presence and can play right across all three backrow positions. His workrate now matches those qualities, especially in defence.

All he needs now is an opportunity.

Hugo Keenan and Will Connors: The best of friends, the best of debuts

Hugo Keenan and Will Connors: The best of friends, the best of debuts 21:09
Ireland women’s shake off the rust to beat Italy 21:09
Man United and Chelsea play out drab draw in the driving rain 19:54
Antrim too good for Waterford in league clash in Dundalk 19:09
Jim Bolger enjoys a fine day on both sides of the Irish Sea 19:07
Crossword Get access to over 6,000 interactive crosswords