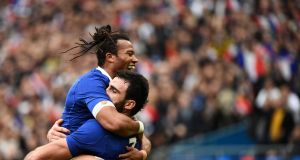 When Eddie Jones talked recently about England looking to become the greatest team the world has ever seen, this was not the start point he was envisaging. The World Cup finalists were about as irresistibly brutal as a damp paper bag for the first hour of a wet Sunday afternoon in Paris and were joyfully ripped apart by a French team not so much revitalised as reborn.

What a difference three months make. Or maybe not. England finished a distant second to South Africa in Yokohama and here was another savage disappointment for anyone lulled into a false sense of security by their remarkable semi-final beating of New Zealand. France led 24-0 after 56 minutes, courtesy of two tries from their new captain Charles Ollivon and an early effort from winger Vincent Rattez, and two electric second-half tries from Jonny May were not enough to spare the visitors’ blushes.

In many ways it was a triumph less for Parisian design as the no-nonsense ways of Wigan. This was Shaun Edwards’s first game since being invited to join Fabien Galthié’s new-look management team as defence coach and his fingerprints were all over this spiky and emotionally super-charged performance by les Bleus. Beneath cascading skies, it was enough to make Gallic supporters of a certain age weep with joy at the tantalising glimpse, finally, of a genuine French rugby renaissance.

There can be no hiding, even so, from the Swiss cheese-like holes in England’s initial effort of the new decade. Along with their EU status they have, on this evidence, also mislaid much of their shape and cohesion. While it might have helped to have a scrum-half as good as Antoine Dupont, this was a long way from being their finest hour under Jones.

It was an eventful game from the outset, with a missed French lineout almost presenting England with an early score and early turnovers on both sides. No one envisaged, however, that the visitors would be 17 points down by the start of the second quarter, any notions of a nice quiet Sunday afternoon rudely shattered.

The sight of Teddy Thomas in a bit of space normally spells trouble and so it proved here after France had found a hole in England’s defensive line. The debutant full-back George Furbank did well to slow the winger down but when the ball was sent left, a nice inside ball from the talented Romain Ntamack released the nippy Rattez to score.

It was just the start. After Furbank had fumbled a pass that might have led to a try in the right corner had he grasped it, France were soon back on the attack and a nerveless penalty from Ntamack rewarded another fierce period of home pressure. France would have more than settled for a double-digit lead after 20 minutes – with Manu Tuilagi also an early departure – but there was more to come.

As Courtney Lawes and Ollivon challenged for a deflected box kick from Dupont, it initially appeared as though the ball had cannoned off the French skipper’s forearm. The referee, Nigel Owens, allowed play to proceed and with some England players having stopped running, Ollivon galloped unchallenged to the line.

When Owens did eventually decide to consult the television match official, however, the evidence was less than clearcut. Was that Lawes’ tattooed arm or a blue sleeve? To England’s chagrin the try was allowed to stand and Ntamack knocked over the conversion like a man knocking the top off his breakfast egg. The half-time score of 17-0 was an eye-catching one to say the least – the first time England had failed to score in the opening half of a championship match since 1988.

There was a reaction of sorts, Ellis Genge clattering heavily into Ntamack from behind after the fly-half had launched a clearance kick, but after 55 minutes France collected another score, a blindside raid by Dupont freeing up Ollivon to slide over for his second. A mass jostling match ensued and, for a moment, it seemed as if England might completely lose the plot. Instead May twice showed his pace to drag his side back into scoreboard contention and Owen Farrell’s last-minute penalty retrieved a losing bonus point.

If England do not improve markedly in Scotland, however, it will make little difference to the final Six Nations equation. - Guardian

No fans, no problem as far as Tiger Woods is concerned in San Francisco 21:29
Second Waterford FC player to undergo testing after reporting Covid-19 symptoms 21:15
Crowd limits to remain at 200 as Government stalls move to phase four 21:15
Ryan Brennan secures the points for 10-man Shelbourne in Donegal 20:18
Defending champion Rafa Nadal pulls out of US Open due to coronavirus concerns 20:40
Crossword Get access to over 6,000 interactive crosswords