Henshaw and O’Mahony named in Ireland XV for Wales visit 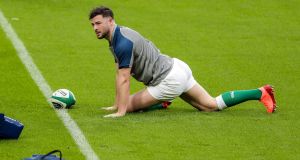 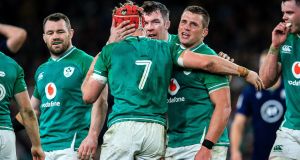 Ireland coach Andy Farrell has been forced to make two changes to the side that faces Wales on Saturday at the Aviva stadium.

Garry Ringrose (hand) and Caelan Doris (concussion) have been ruled out while Will Addison has not recovered from a calf injury to be considered for selection.

CJ Stander switches to number eight with Peter O’Mahony returning to the starting XV at blindside. Leinster’s Max Deegan is set to win his first cap off the bench.

Both Munster backrowers featured prominently during last weekend’s 19-12 victory over Scotland when Doris was forced off in the fifth minute following a head clash with Adam Hastings.

“Caelan had a bit of a knock previously this season [against Treviso in November],” said Farrell. “He’s a young boy. I think we’ll do right by young kids to make sure they recover properly.”

Dave Kilcoyne, who also suffered a head injury against Scotland, has been included in the squad, as loosehead cover for Cian Healy, but should he fail to complete the recovery process Jack McGrath will replace him on the bench.

Keith Earls has shaken off a knee problem to return as a replacement with Ringrose’s absence reuniting the old Connacht midfield of Robbie Henshaw and Bundee Aki.

Ulster hooker Rob Herring continues ahead of Ronàn Kelleher while Conor Murray is preferred over John Cooney at scrumhalf.

Besides Rory Best (retirement) and Rob Kearney (dropped), it is largely same personnel that featured in 2019 with Kelleher and Deegan the only new players in the match day squad.

“I think Max has all the attributes of a great backrower. You go into the unknown with test match rugby but we will see if he is ready. He’s a great all round footballer who can add an extra dimension when he comes off the bench, especially in attack.”