Conor Murray and John Cooney keeping the gloves on 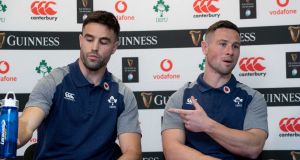 “I don’t know. I don’t know. We’ll see,” says Conor Murray on being asked if he thinks he will hold his place for Ireland’s game against Wales this weekend.

John Cooney is sitting next to him with his hands on his lap. It is a novel one-act play that the IRFU has organised with its scrum-halves called “Competitive Tension and the Art of Diplomacy”.

Leinster’s Luke McGrath is cast as the mysterious third man, an interested party who does not physically appear but has a bearing on the action.

History does not tell us what Johnny Sexton and Ronan O’Gara would have generated in kilowatts had they been seated side by side and asked who should get the No 10 shirt. You could expect clouds to gather, lightening to flash.

But today, artful and discreet, the two refuse to shake off the gloves. Is this tete a tete awkward, they are asked. Murray takes the lead role and strikes a posture.

“No. Ye make it awkward,” he says of the silent wars, the suppressed frustration and the imagined burning effigies in hotel rooms.

“They are two very different personalities than the two of us,” he adds. “You be yourself. You don’t have to try to create animosity. You get along, and try as hard as you can. We’ve had it for quite a while. Ye can continue to build it up.”

Murray played for 59 minutes against Scotland, before Cooney came into the match for the final 21 minutes.

“Yeah, but there’s no point in being nasty,” says Murray about the dynamic. Although he still won’t allow Cooney to take hold of the shirt.

“So it works out that way, you don’t always have to make it obvious that you have a bit of discomfort. If I’m going to be my best self, he’s gonna be his best self. It doesn’t really matter, you can always get along.”

Murray is first in the pecking order, then Cooney and McGrath. Not so long ago Kieran Marmion was there too. Coaches change their minds and players perish. Cooney has taken time via Connacht, where Pat Lam taught him to track like a New Zealander, and now Ulster to position himself for hot breath on Murray’s neck.

Yet it is less two players generating personal rancour than the two existing for the team’s bidding. The jeopardy is of Cooney falling into a mindset of a chorus player, forever the back-up.

“No,” he says. “Maybe in years gone by. Like I said, last year I probably didn’t put myself under more pressure to try and get more game time, and I was kind of happy just to come on and get whatever because I didn’t have too many caps at the time. And you’re kind of happy just to get what you can.

But Murray is not immune to the whispers and the headlines and the call for change.

He’s not blind to an Ulster team going better than Munster, and at the centre of it Cooney, the energetic general, scoring tries, kicking points, driving the Ulster players with, dare we say, Jesuitical zeal and creating his own momentum. A Gonzaga boy is the current toast of Ravenhill.

Murray can cleverly turn that on its head, and see Cooney, not as an existential threat to his number one status, but as an energy-giver and maybe a rod to gently beat him.

A lot of chat

“It’s clear and obvious with the season that John’s having that’s obviously going to cause a lot of ripples, a lot of chat, and that can be a big distraction,” says Murray.

“We’re both very ambitious. We want to play. We want to start. We want to wear the number nine. There’s a lot of talk outside about the rivalry. I think there’s just a respect there.

“You’re not gonna hide information from each other. You’re not gonna get up earlier and do extra sessions. It’s a really open environment. It’s only going to drive us on to be better.”

Cooney tells a story. Once on the Irish under-19s he threw a pass over Ian Madigan’s head and got dropped the next week.

Murray helpfully informs him that Ian Madigan is quite short.

“It actually worked out alright,” explains Cooney. “But then I went for a drop goal, from scrumhalf, missed it and that was the end of it.”

It has been a winding path from there to here. Not the end, a beginning. The journey has fortified his thinking and he is the closest he’s ever been at getting to where he wants to be.

There’s no malevolence from Murray or Cooney. None at least for us to see.