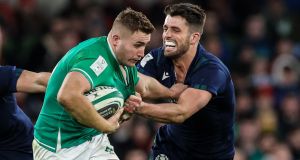 The inevitable comparison with Rob Kearney is Jordan Larmour’s price for winning Andy Farrell’s confidence at fullback. The two play the position differently, however, with Larmour taking almost every attacking opportunity Ireland had in the first half of their Six Nations opener against Scotland, and triggering a couple himself.

From as early as the sixth minute, instincts to worry the Scotland defence kicked into life. A cutting run up the right scattered the Scottish players, his evasive, staccato style effectively standing opposition tacklers still.

Pace, balance and directional change took Larmour deep into Scotland’s half before he stepped inside Scotland fullback Stuart Hogg and offloaded to Conor Murray in support.

At 13 and 17 minutes, Larmour again chose to take the ground in front of him to run with the ball, comfortably looking around for options. His natural acceleration gives the appearance of him having time, a great asset to his go-forward eagerness.

On 21 minutes a high ball is sent on to Andrew Conway and Blair Kinghorn. Covering, Larmour collides with Garry Ringrose as both Conway and Kinghorn miss the ball and it kicks in field on the first bounce. No real damage done but scrappy looking.

On 27 minutes he again takes the ball into the Scotland 22 in a probing run, eager to try and cause some hurt. But he’s stopped almost at source.

Perhaps the defining moment of the match for Larmour arrives in the 30th minute.

Hogg sends up a high ball and Larmour misses the catch. But he easily recovers to gather it, and turns to make a counterattack from inside the Irish 22. Running out of defence and outstripping Hogg, he chips the ball over advancing Scottish heads on the run, but is tripped by a Scotland foot in traffic.

The sequence brings into focus the high ball work in progress and a definite strength in his reactive strike running.

Ireland might have expected to see a few more Scotland high balls into the fullback position from Hogg, whose kicking was very good. But they decided against that tactic, with Larmour opening the second half again patrolling for openings.

On 46 minutes he intercepts a Huw Jones pass to number eight Nick Haining inside the Ireland 22 and begins to streak upfield. But Hogg catches his shirt and the escape is foiled.

A few minutes later, atypical sloppy footwork from Larmour takes him into touch as Andrew Conway releases him deep in Ireland’s half.

Larmour’s foot on the line gifts Scotland with an attacking lineout and a sequence that ends with Hogg committing a cardinal error in allowing the ball to slip from his hand just as he is touching down.

“Yeah, schoolboy error,” confessed Hogg afterwards. “I can’t change what’s happened, just have to deal with it. I’ve apologised to the boys. Bitterly disappointed to drop the ball on the line. We got ourselves into some good positions through the forwards’ hard work, and bitterly disappointed not to finish it off.”

For the rest of the second half Larmour takes the ball into contact all but once and on 66 minutes kicks from hand. He fetches a high ball from a Scotland clearance and again sets off with clear ground in front. This time he punts high, not long, and contests, gaining the ball.

That is Larmour’s only kick from hand, apart from his chip over the advancing Scotland line in the first half. It’s refreshing to see the willingness of a natural strike runner to probe and test the opposition defence. But a greater development of his kicking game would have been an additional asset.

It’s not that Larmour should kick rather than take the ball into contact or break into space. But there are occasions when the defence needs a break, when the ball needs to be out of Ireland’s half, when the opposition fullback needs to be put under pressure, especially with strong contenders in the air on both wings in Conway and Jacob Stockdale.

There were times during the game when the ball needed to be put back in Scottish hands and there were times when Larmour, very often for his own wellbeing, should not have been willing to take contact all the time from the quicker and heavier Scotland forwards.

Especially in the second half, when space seemed to shrink, he too often meekly ran into a solid Scottish wall and was rag-dolled by bigger men. There is a lot of positivity around the Irish fullback and it’s easy to see why. But to have had that option of an occasional strategic, territorial kick could smooth his progress.

It is bigger, stronger, faster Wales this week. Larmour needs to keep them thinking.