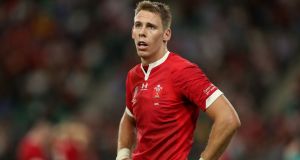 Liam Williams will not feature for Wales against Ireland at the Aviva Stadium on Saturday. He looks set to be unavailable until the Six Nations Championship’s latter stages.

The Saracens back has not played since suffering an ankle injury ahead of Wales’ World Cup semi-final against South Africa last October. It had been hoped he might have been in the mix for Saturday’s appointment with Ireland in Dublin.

But a return for the fullback or wing now looks unlikely until rounds four or five next month, when Wales tackle England at Twickenham then host Scotland.

“Liam’s struggling a bit at the moment,” said Wales defence coach Byron Hayward. “It [Saturday’s game] is a little bit early for Liam. We are possibly looking at the fourth or fifth games in the championship. But look at all the positives – the boys all worked well last weekend against Italy].

“Leigh Halfpenny had a great game last weekend at fullback, though it would be nice to get Liam back, obviously.”

There is better news elsewhere for Wales, with centre Owen Watkin, scrumhalf Gareth Davies and hooker Elliot Dee all back in training following recent injuries.

Wales head coach Wayne Pivac is due to name his starting line-up on Thursday for the Ireland game and the biggest selection debate looks set to revolve around midfield, and whether or not Saracens centre Nick Tompkins is handed a first Test start.

The 24-year-old excelled as a second-half replacement against Italy, scoring a brilliant solo try as Wales crushed the Azzurri 42-0.

If Tompkins is promoted off the bench, it would seem likely that George North would revert to his familiar wing position from outside centre.

Hayward said: “Nick made an impact and certainly put his hand up for selection. He took to the international stage like he had been there for many years. He applied himself in training and is very knowledgeable. Saracens are used to winning and playing in high-pressure games, and I think that showed.”

Wales enjoyed a five-try triumph against Italy but they now head to Dublin’s Aviva Stadium, a venue where they have not won a Six Nations game since 2012.

It was also the scene of Wales’ last Six Nations defeat – 37-27 in February 2018 but since when they have claimed a Welsh record-equalling eight successive victories in the tournament.

“We haven’t won there since 2012, so that is massive,” Hayward said. “It’s usually a close game there, and just after half-time we need to make sure we’re on the right side of the scoreboard in that quarter.

“Ireland are prolific where once they get in your 22 they stay there and they squeeze you, and they are probably the best team in the Northern Hemisphere at doing that.

“So our discipline is imperative but also we are going to relish the opportunity that when they come into our 22, we have to muscle up and front up and make sure we don’t give any points away early in our defensive sets.”

1 No further players to be called up to Ireland squad to face Georgia
2 Kevin McStay: Maybe a knockout All-Ireland Championship is the long-term solution?
3 Gerry Thornley: Ireland don’t want to box themselves into a corner
4 Former France and Stade Francais winger Dominici has died aged 48
5 Owen Doyle: Ireland suffered from officiating of the breakdown
Real news has value SUBSCRIBE