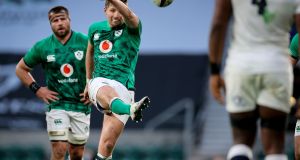 The Ireland 10 Ross Byrne needs to have one eye on “the plan” and the other on what his gut tells him. Keep the forwards on the front foot and build pressure on the scoreboard. Photograph: Billy Stickland/Inpho

Andy Farrell said he learned a lot about the players who played at Twickenham for the first time. Some of them became men, he said.

Great to hear – after watching such a naive strategic approach from Ireland – but Caelan Doris was already a proven man before this game. Same goes for James Ryan and Andrew Porter, although this pair did learn some painful lessons about leading while in reverse and scrummaging out of position.

10 One mask is good. Would two be better?

14 Suzi Quatro: ‘If he’d done that backstage he’d have been singing soprano for the rest of his life’

18 Coronavirus: Vaccination of over-70s to start next month, says Donnelly

23 Could a Covid-19 smell test help bring coronavirus under control?

26 Covid-19: How to look after yourself if you catch the virus

27 Una Mullally: Government failing to lead us through pandemic

30 Talks resume between unions and officials over reopening special schools

31 Q&A: Can I still pass Covid on after I’ve been vaccinated?

33 My Covid experience: ‘The mind starts to race. Oh God, why didn’t I do more with my life?’

36 Sturgeon ups the ante with promise on independence vote

37 Covid-19: Passengers may be required to pay for stay in quarantine

39 Lampard afforded precious little time to pull out of nosedive

40 Teaching was Jerry Kiernan’s vocation; in 30 years he never missed a day