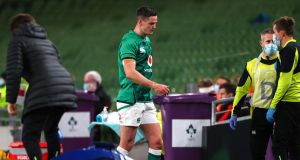 Ireland’s Johnny Sexton, as well as Ed Byrne and Rob Henshaw, will miss the this Sunday’s clash with Georgia. Photograph: Billy Stickland/Inpho

There will be no further additions to the Irish 34-man squad save for the uncapped Ulster loosehead Eric O’Sullivan, who was called up after Ed Byrne joined Johnny Sexton and Rob Henshaw on the casualty list.

Ireland’s forwards coach Simon Easterby also intimated the side will not be radically altered for their final Group A game in the Autumn Nations Cup against Georgia at the Aviva Stadium on Sunday (kick-off 2pm), with last Saturday’s 18-7 defeat by England not altering their approach.

“We probably had a plan a few weeks ago for these four games after we played France. That wouldn’t change too much. I think there’s also an opportunity this weekend to alter things slightly and shift things around a little bit in terms of some personnel, but not a huge amount because we want these guys to know what it takes to go out and win Test matches.”

“Georgia are a physical team. They’ll front up like England did, they’ll pose a challenge to us physically and we need to make sure that we’re accurate in those things that are in our control.”

The five players in the squad yet to feature are Shane Daly, Stuart McCloskey, Kieran Marmion, John Ryan and Ultan Dillane.