The likes of Shane Daly, Kieran Marmion and Ultan Dillane are set to get their chance 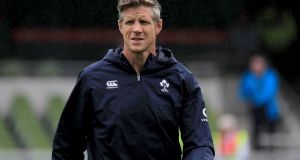 Although Andy Farrell had intimated that the Irish management might delve further than the 34-man squad chosen for Ireland’s Autumn Nations Cup campaign, apart from the Ulster loose-head Eric O’Sullivan no further players will be called up in advance of next Sunday’s game against Georgia.

Forwards’ coach Simon Easterby has confirmed they will be resisting the opportunity to promote some of the uncapped young guns, or indeed the in-form Rhys Ruddock, who have been helping the Irish provinces to cut a swathe through their Pro14 opponents. They will instead reward those players who have been training for the last few weeks in the IRFU’s HPC.

“I guess it’s always a question that gets thrown around but it’s really important that we select the players we originally picked. It’s another Test match, there are players that are going well in their provinces and putting their hand up, but there’s also players who have trained really well over the last couple of weeks that haven’t had opportunities with us.

“It’s getting a balance there and the squad we selected originally was a squad we felt could take us through to the end of the Six Nations and into these autumn games. We felt we wanted to do that justice and probably not look to pick too much from outside the group.”

The players in the original squad yet to feature in the games against Wales and England are the uncapped Munster outside back Shane Daly, as well as Stuart McCloskey, Kieran Marmion, John Ryan and Ultan Dillane.

No less than Ruddock, Munster backrower Gavin Coombes (six tries in four starts) has been harvesting man-of-the-match rewards while for the likes of Munster scrumhalf Craig Casey and Leinster outhalf Harry Byrne, their time will come - just not yet.

“Players coming in for a week, they have got a lot to deal with and take on board. Is it giving them the best opportunity to perform if we’re asking them to come in six or seven days before a Test match?” reasoned Easterby.

“It’s getting balance and we just felt like the guys who we selected in the original wider squad were guys that we were looking to play in this Georgia game. There will be some experience in the team as well as some inexperience for the weekend. We don’t want to just be handing out caps as well, we want to make sure that guys earn the right to get selected.”

With Ed Byrne (calf) joining Johnny Sexton and Robbie Henshaw in continuing his rehab this week, as the only specialist loose-head in the squad apart from Cian Healy, the uncapped O’Sullivan (24) could be in line for some game time against Georgia.

The 24-year-old Dublin-born prop was schooled in Templeogue College and impressed when breaking into the Ulster team, not least with a voracious tackle count, after moving from Trinity to Banbridge.

“We had Ed Byrne go down with a bit of a calf strain and it’s obviously a specialised position so we need specialist cover. Eric has been doing really well up in Ulster, we’re really happy with his progress, and it’s a great chance for us to see him up close and see him work through the week. Unfortunately, Ed is continuing his rehab now.”

Invariably, Easterby was obliged to address the line-out malfunctions which re-surfaced in Twickenham after an equally trying night in the Six Nations finale in the Stade de France.

We’re also on a journey with this lineout group, it’s a new group

“We are continually trying to grow some experience and some leadership in that group. We had a couple of young players in there, Ronan (Kelleher) making his first start at Twickenham and he has done really well across the board over the last six weeks.

“We had a number of challenges in there from the opposition, as well as making sure that we get our own drills in order. There is probably a combination of things throughout the week.

“We felt like we had a good preparation but it’s very different preparation and then when the pressure comes on and the challenge is laid down, that’s when we find out a little bit more about players.”

The forwards coach admitted there were several factors which caused Ireland problems, be it the line-out strategy, the options taken during the game and execution. As a result, he admitted they may have to trim down their options over the next couple of weeks. After the Georgia game next Sunday at the Aviva Stadium, Ireland are likely to host Scotland at the same venue six days later at home.

“I would say there is a combination of things. A little bit of inexperience in a number of areas, we probably needed to strip back a little bit some of the options that we had, and we will look to implement those over the next couple of weeks.

“We’re also on a journey with this lineout group, it’s a new group. We’ve got a couple of inexperienced younger guys in there who we feel are learning every week and they’re growing in their roles. It takes time to grow combinations and get those things right.

“England, in terms of where they’re at in comparison to where we’re at, they have far more experience that they’ve gained over the last couple of seasons as a forward pack compared to some of the guys in our group. That’s all part of the building process that we’re trying to get to.

“There’s definitely a couple of fixes and alterations we need to make but I don’t think it’s doom and gloom,” Easterby maintained. “We’re really confident with the guys we’ve selected and the guys that took the pitch on the weekend.”

The go-to ploy of turning down shots at goal for attacking set-pieces, particularly line-outs, will largely remain decisions for the team leaders on the pitch.

“You allow the leadership group to make those decisions. If the players are always looking up at the stands and wondering what to do then we are not doing our job as a coaching team to try and build their decision-making under pressure. We back the decisions that they make a hundred per cent.

“Is there a call sometimes to take those three points and try and build a score like we did against Wales? Yeah, that certainly can keep momentum going and not take it away from an opportunity to score points but you’ve also got a feel out there in the game. The players may feel there is an opportunity to get more out of a strike play or a maul or a scrum than it is to take three points because they feel the opposition is under pressure.

“Now, we don’t always get those decisions right but more often than not it is a decision made on the pitch and not one we are screaming down the microphone. We’ve got to allow the players to build experience and understanding of the moment.”