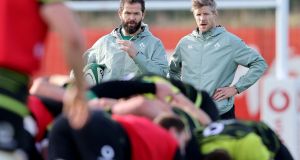 Ireland have reaped a rich harvest from opting to kick penalties to the corner in recent years but Simon Easterby, who has overseen a largely effective line-out over the last six-plus seasons, admits it has become increasingly difficult for packs to maul over the line, particularly against frontline Test packs.

“I think in general it’s more challenging in the air and I think often that challenge in the air can just offset a jumper landing. It might be a challenge in the air which looks to the naked eye like something to nothing but it forces the jumper to land maybe half a metre, a metre, away from the position where he thinks he’s going to land, and away from the position that his guys coming into support him think he is going to land.

“Everything is offset then and if you don’t quite get that foundation, whether that’s through your lift, your jump and your landing and the connections, it can be really hard to regain your momentum against good defences.

“But at the top level it is becoming a little bit harder to score from your maul.”

Ireland’s forwards coach points out that Ireland were also required to defend four English line-out mauls in their own 22 and did so successfully, but given all this maybe it’s time to revise a strategy that ultimately led to nine of 20 tries in the 2018 Grand Slam and another nine of 17 in the 2020 Six Nations.

“It’s a discussion we’ve had, and it’s not just this week, we’ve had it throughout the last few weeks,” he confirms. “There were occasions in the Welsh game where we decided to try and build a score a different way. Sometimes it’s the feel for the situation in the game. Unfortunately England got to 12-0 too easily.

That said, the coaches do not want a scenario whereby the players are continually looking to the sideline for advice, and will continue to back the on-field leaders to trust their feel for the situation.

“But we have to be more accurate when we go to the corner. That’s 100 per cent, and that doesn’t take away from anything else we’re doing. That’s down to me as the line-out coach to deal with and also make sure that the players deliver consistency in what they’ve done in the week and what they take into the game. And more often than not we’ll back the players to make those right decisions.”

Last Saturday, after losing two of the first five throws (twice after rejecting shots at goal) Ireland actually won 10 throws in a row, although not all of them cleanly. The ship continued to steady after the introduction of Iain Henderson and Rob Herring before another overthrow to the tail in the last minute, but the maul was usually stopped or sacked.”

With Henderson on the bench, James Ryan – a 24-year-old first-time captain also called the line-outs for a 22-year-old hooker making his first Test start – and Easterby said they would continue with their policy of having a recognised caller.

“I think it’s important you have probably more of a specific caller for each week and then we also know that if one of the other guys can step in. We would probably give responsibility to one guy on the attack side of the ball and then one of the others would look to focus on the defence side.”

Whatever changes there are to the team will be confined to players from within the existing 34-man squad.

“Set-piece in particular has to be something that we’re in control of and deliver more accuracy and whoever calls this weekend we’ll do it with the backing of everyone and the trust that he’s the right guy to do it for this game, and he’ll have the support of those guys around him as well.”