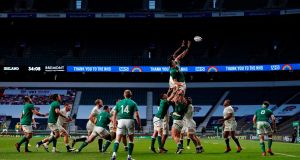 A lineout at Twickenham on Saturday. One of the legacies from the Joe Schmidt era is to kick penalties to the corner, but it may be time for some revision. Photograph: Adrian Dennis/AFP/Getty Images

In the aftermath of last Saturday’s 18-7 defeat by England, Andy Farrell stressed how invaluable an experience it would be for those players who are less accustomed to Test match rugby. It’s a valid point, especially as compared to the Pro14, playing England at Twickenham is virtually a different sport.

However, this goes beyond the players, for no less than Farrell this was not an especially good day at the office for the lineout coach Simon Easterby or the attack coach Mike Catt.

One of the legacies from the Joe Schmidt era is to kick penalties to the corner, but it may be time for some revision. It has largely remained a profitable go-to tactic but the Irish lineout is no longer the secure platform it used to be. Defensive mauls, helped by law tweaks, are better able to repel catch-and-drives, excepting teams such as Georgia.

Think back to that 40-29 win over the All Blacks in Chicago in November 2016, a benchmark day in several respects. Both the first and fourth of Ireland’s five tries emanated from turning down shots at goal by going to the corner; Jordi Murphy being driven over the line and after the pack powered infield, Conor Murray went blind for Johnny Sexton to put Simon Zebo over.

And so it continued. All told, nine of Ireland’s 20 tries in the 2018 Grand Slam-winning campaign emanated from the decisions to eschew kicks at goal by going up the line. Two were mauled over the line and the other half dozen were scored off the ensuing pressure from safely secured lineouts.

Rory Best started all of those games and ditto Devin Toner bar the Paris and Twickenham wins which bookended the Slam, when he came off the bench.

Even post-Dev, overall the ploy is largely still in profit. The second try against Scotland in the opening World Cup pool win was a Best try resulting from the decision to turn down a safe three points by going to the corner, although by the time of the quarter-final not only did Sexton and Joey Carbery miss three kicks to touch but the All Blacks had been forewarned and forearmed.

Ireland have still favoured going to the corner and nine of their 17 tries in the 2020 Six Nations emanated from rejecting shots at goal by going up the line. Another two tries followed the option of scrums under the posts. However many times the ploy hasn’t worked, clearly it remains in credit.

On the first occasion Sexton kicked to the corner in the Six Nations finale in Paris, the maul was driven backwards, but given it was against 14 men it was a legitimate tactic. That said, Sexton himself has conceded that as the sin-binned French player was fullback Anthony Bouthier, he ought to have opted for a scrum. Four minutes later, when doing just that, it led to Cian Healy’s try.

Against 15 men, Sexton subsequently twice took three points but then in first-half overtime, opted to go up the line rather than trim France’s lead to a point with the last play of the first half. Maul held and mental edge to France.

In the first Autumn Nations Cup game against Wales there was a more balanced approach. Both tries, by Roux and James Lowe, were the product of opting for scrums with penalties under the posts, but Ireland also chose to kick six penalties.

On Saturday though, not only did Ireland again no longer have their 6ft 10in go-to lock, but fearful of England’s scrum they opted to have Quinn Roux pack down behind Andrew Porter and leave Iain Henderson on the bench. Furthermore, their starting hooker was a 22-year-old making his first Test start, while the 24-year-old James Ryan was captaining his country for the first time.

This should have informed some of the pre-match thinking or off-field instructions.

Of course, the Irish attack had enough possession to make more of an impression but increasingly became easier to read by the English defence

When Ireland were awarded a penalty inside the 10-metre line shortly after falling 5-0 down, it might have made sense to afford Ross Byrne a shot at goal. Kelleher’s second throw having been overcooked and crooked, this one was overthrown to Peter O’Mahony and Jonny May broke away to score his wonder try.

Trailing 12-0 in the 25th minute, it certainly made sense to afford Byrne a kickable penalty, both to get Ireland and him off zero, from inside the 22 rather than gamble on going to the corner against a full-strength English pack. This time Maro Itoje pick-pocketed Ryan. It’s stretching things but Ireland could conceivably have led 6-5 instead.

Kelleher has a hell of an arm, clearly with more capacity to hit the tail than Best or Sean Cronin, and he will be a fine Test hooker. But it tells us much that Byrne almost reclaimed two of his throws.

Of course, the Irish attack had enough possession (61 per cent) to make more of an impression but increasingly became easier to read by the English defence with straight charges from behind the gain line in a reworking of last February’s script.

Those overcooked throws apart, Byrne hardly hit the line or took the ball into contact, something he usually does early on in Leinster games, if primarily as a marker. His ability to carry out game plans has always been one of his strengths yet curiously, he played further behind the gain line last Saturday than he does in blue or as he did when coming off the bench in Paris.

Byrne was noticeably flatter to the gain line in that 10-minute cameo. Since winning the first of nine caps two years ago, his only two starts have been in Twickenham, which seems the shortest of short straws.

At least the lineout and the depth of the back line are fixable. In theory anyhow.