Gordon D’Arcy: Leinster have game-changers - Munster must develop some 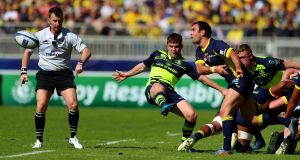 Nobody can say Clermont weren’t due one over Leinster. Camille Lopez’s drop goals balances the scales for all those Brock James misses at the RDS in 2010.

They have gone some way to undo the damage done on that sunny day in Bordeaux in 2012, but they only squeaked past and Leinster will take solid building blocks from that.

Morgan Parra deserves all the plaudits following his flawless decision-making in the opening 18 minutes. He not only controlled the tempo, he forced his personality on the game before anyone else could.

Those two passes for David Strettle, both leading to tries which he converted, were breathtaking to behold.

But there was also a subtlety to Parra’s influence; that turnover, when Joey Carbery carried into contact, would please any flanker and his technically superb kicking heaped pressure on Leinster.

Stuart Lancaster had spoken about the need to be ready for the onslaught. But, like most things in life, players need to experience it for themselves.

Graham Henry or Lancaster or anyone can warn about what’s coming, but only now do they truly understand how important it is to recognise and seize upon the merest hint of a scoring opportunity in these sort of games.

Leinster had one chance to change the momentum in that crucial opening period which cost 15 points. In the seventh minute they were trailing 7-0 but finally attacking within their framework. Robbie Henshaw fixed his man and Fergus McFadden ran a straight line off the pass.

I’ve written before about recognising the opportunity; only when the short line is taken do we see the chance unfolding outside and the dogleg in the Clermont defence. The intent is good but as soon as Lopez made the tackle, three Clermont men were lying in wait. All three of them arched over the man in possession.

Fritz Lee came up with the ball and a Clermont penalty.

The salient point here was the disconnect forced by Clermont kept the momentum firmly behind them as the game careered even further away from Leinster. So 7-0 became 15-0 and an enormous mountain to scale.

If they had avoided contact at this moment, shifted the ball to the space out wide, it could have been any number of outcomes, at the very least some much-needed Leinster possession.

This was the only time Clermont were on the rack in those early exchanges.

Sliding doors. From the ensuing lineout just outside the 22, Fritz Lee and Parra sent long passes wide to Scott Spedding but the officials spotted Isa Nacewa’s tug on Strettle’s jersey. Parra made it 10-0 but, more importantly, Clermont could see the chink in the Leinster armour.

It’s no coincidence that the second try came down the now absent left winger’s channel.

Parra knew he could manipulate the Leinster defence to put Strettle gliding outside Dan Leavy. It was the pass that made the score.

Play this game tomorrow and I’d expect Leinster to win. Play it a week from now, it could be Clermont. That’s how close these two teams are.

Munster and Saracens was an entirely different story. Munster lacked impact off their bench and depth in their squad to cope with losing one scrumhalf.

This is not a criticism of Duncan Williams, but Rassie Erasmus didn’t feel he had another nine with the ability to change the tempo or take pressure off Tyler Bleyendaal. Williams seemed to be tiring, he was under heavy strain, but he was forced to go all 80 minutes.

Also, this is effectively Bleyendaal’s first season at this level. Erasmus knows the need to strengthen certain areas to ensure Munster are not so glaringly exposed next season and beyond. That’s already happening with JJ Hanrahan’s return from Northampton.

But Saracens highlighted this in several areas. Take Jean Deysel coming into the fray for an injured Tommy O’Donnell, while Schalk Burger arrived for Jackson Wray. Burger is a former world player of the year, a World Cup winner with 86 Springbok caps, caps that have plenty to do with Deysel only playing four Test matches over the same period of time for South Africa.

Granted, the short-term Munster flanker cracked his ribs in his first tackle on George Kruis, and was forced to play on due to Peter O’Mahony’s concussion, but Burger made two significant impacts in this semi-final. No Munster player came off the bench to similar effect.

One massive Burger hit on Simon Zebo gifted possession back to Saracens in the lead up to the Chris Wyles try and his efforts in the 63rd-minute scrum led to a penalty that allowed Owen Farrell to make it 16-3.

The contrasting body angles of Burger and Deysel are notable. Deysel adopts a defensive mode while Burger is locked-in, generating all the power behind Mako Vunipola; ankles below his knees, knees below hips, hips below shoulder. That’s textbook scrummaging and gives Vunipola every opportunity to damage John Ryan.

Munster did extremely well to be only trailing 13-3 with an hour played. Saracens slowly and efficiently sucked any momentum out of their opponents and the crowd, but that was largely down to Munster being unable to change up.

I still feel they would have been better served by starting Francis Saili, with Rory Scannell bringing a calmer head off the bench.

This is nit-picking. They surprised everyone by reaching this stage of the competition and by improving so dramatically from this season to last.

They were met by a Saracens defence of immense power and relentlessness, but there are small moments that can be analysed to offer lessons.

On 68 minutes, Saili kicked long into the 22. Billy Vunipola tracked back, as he had done all afternoon, gathered and got past Saili’s first-up tackle. He was put down as the Munster subs piled in, yet Saracens came up with the ball.

Farrell kicked long to Zebo, who ran into traffic where the ball was dislodged by Burger. Possession went back to Farrell who punted long, not unlike Saili had moments earlier, but this time the chase resulted in Chris Ashton snagging Andrew Conway before Schalk Brits, another genuine impact sub, ripped back the ball.

Next, Maro Itoje pin-balled his frame off two red jerseys before going to ground. Farrell arrived, 80 metres up field from his last touch, and his grubber resulted in Wyles’s try.

The 15-20 point difference that Erasmus said exists between Munster and Saracens is true, but the onus is on Munster to change that.

Saracens won’t come back to the chasing pack. Their average age promises more improvement. The skill and accuracy levels required to win a semi-final is now apparent to Munster.

It’s different for Leinster. Eradicate the 50-50 moments in that opening 15 minutes and the scoreboard possibly reads 7-3.

There is a huge amount of what-ifs from Lyon. Twice the ball was slapped out of Leinster hands – Carbery and Sexton – with clear scoring opportunities. These are the moments that steer a game one way or the other.

This was Clermont’s day. There is nothing glaringly obvious to fault Leinster for. They didn’t miss any huge tackles. Nobody needs to be dragged over the coals.

Leavy’s disallowed try was a huge momentum-changer, a 10-point swing, but had he let go of Aurélien Rougerie’s ankle, the try probably wouldn’t have materialised. He could have been a tiny bit smarter but nobody is saying anything to him about it because Leavy and Jack Conan both had really strong games. Rhys Ruddock was outstanding.

That five or six calls went badly against them – Isa’s yellow, Leavy’s try, the slap downs – all tell me they were unlucky.

Parra was brilliant for both tries and Lopez hit two drop goals that Brock James missed at the RDS seven years ago.

What I did see within the Leinster structure was the capability for someone like Garry Ringrose to do something special. He’s not alone.

Munster must develop these sort of players. That is the size of the task ahead for Erasmus. And empower them to change up when the game demands it.

In the meantime, both provinces have a Pro12 title to win. Nothing short of the title will satisfy Leinster but if Munster can regroup they will see a huge opportunity.

Leinster, playing as good as we know they can, will put any slip-ups down to themselves. Munster might see it differently. A one-off Dublin final could level the playing field.

It would certainly make for a decent end to a season of clear growth.